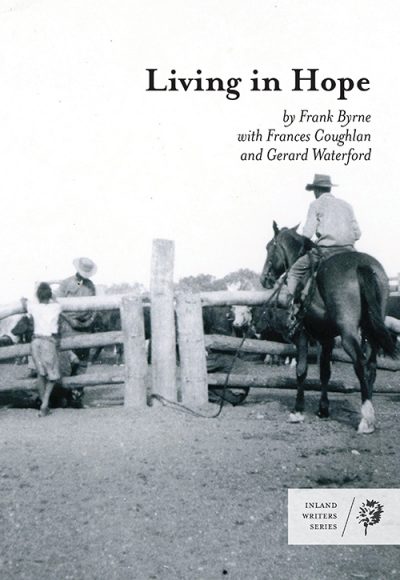 A memoir by a member of the Stolen Generations, Living in Hope (Frank Byrne with Gerard Waterford & Francis Coughlan, Ptilotus Press), has won the Small Press Network’s (SPN) Most Underrated Book Award (MUBA) for 2018.

Byrne, who passed away in 2017 after finishing the book, is the first Indigenous Australian author to win the MUBA, and Living in Hope is the first memoir to win the award in its seven-year history.

Living in Hope tells how Byrne was moved from place to place after being taken from his mother, a Gooniyandi woman from Christmas Creek in the Kimberley, in 1942, aged six. The memoir forms the first three chapters of Byrne’s life story, which is forthcoming from Ptilotus Press in 2019 and will be distributed by NewSouth Books.

Judges Sarah L’Estrange, Megan O’Brien and Toni Jordan said that Living in Hope is an ‘important story of survival and hope’ and that they ‘hope the award provides some measure of comfort to his family’.

Frank’s son, Trevor Byrne, accepted the award on behalf of his father alongside co-authors Coughlan and Waterford at an event in Melbourne on 22 November, during SPN’s Independent Publishing Conference.

‘It is very important for people to learn what happened back in them days, the way the government system was authorised to take kids away from their parents. People need to learn from that history,’ said Trevor Byrne. ‘The MUBA win gets our dad’s story out there and people need to understand his story doesn’t just reflect what happened to Aboriginal people here, but what has happened to Indigenous Peoples across the world.’

Living in Hope was chosen from a shortlist of three that also included Gwen (Goldie Goldbloom, Fremantle Press) and Plane Tree Drive (Lynette Washington, MidnightSun). Byrne’s memoir also won the award for nonfiction at the 2018 Territory Read Book of the Year Awards.

The Most Underrated Book Award ‘celebrates hidden gems—engaging and creative books across all genres that deserve to reach a wider audience’.