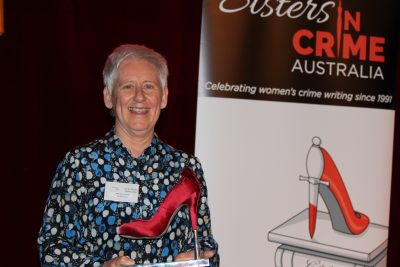 The winners of the 2018 Scarlet Stiletto Awards, presented by Sisters in Crime, have been announced.

Melbourne writer Philomena Horsley, a medical anthropologist who specialises in autopsies, won the $1500 first prize and the Scarlet Stiletto trophy for her short story about domestic violence, ‘Darkness in the Port’.

Victorian writer and journalist Fin J Ross received four awards. Ross was awarded second prize ($1000), as well as the $1000 Body in the Library award and the inaugural Forensic Linguists Award ($1000) for her short story ‘Deadly Ernestine’. Ross also picked up the Award for Cross Genre ($500) for another story, ‘Victory of Kyrnos’.

Melbourne writer Kat Clay won third prize ($500), was awarded the Kerry Greenwood Malice Domestic Award ($750), and was runner-up in the Body in the Library award ($500) for her story ‘Lady Loveday Investigates’.

Other winners on the night include:

The judges decided not to award the Liz Navratil Award for Best Story with a Disabled Protagonist, worth $400, which is sponsored by the Queensland Chapter of Sisters in Crime.

Chosen from 201 applications, the winners were announced at an event hosted by actor Kate Atkinson and author Cate Kennedy, held in Melbourne on 24 November.