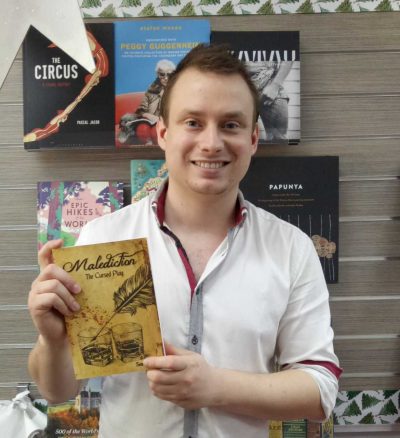 In the lead-up to Christmas, the busiest time of year on the bookselling calendar, Books+Publishing is asking booksellers across the country to predict their biggest sellers and ‘surprise sellers’.

In this instalment, The Bookshop Darwin manager Sean Guy offers his Christmas predictions.

The Lost Man (Macmillan) may be Jane Harper’s best yet: a high-tension whodunit featuring a small family on an enormous rural cattle station. One death. No witnesses.

Past Tense (Lee Child, Bantam): Jack Reacher novels are, without doubt, some of the most popular thrillers we have in stock. He simply cannot write fast enough to satisfy our readers!

The Arsonist (Chloe Hooper, Hamish Hamilton): Written in Hooper’s engaging style, The Arsonist has already proven itself a brilliant read, and is sure to exceed sales of her acclaimed first book, The Tall Man (Penguin).

Leigh Sales needs no introduction. Her podcast with Annabel Crabb is enthralling the nation, and her latest book Any Ordinary Day (Hamish Hamilton) discusses the most important events of our lives in a way that no other book has.

The Subtle Art of Not Giving a F*ck (Mark Manson, Macmillan): I finally gave in and read the ‘self-help’ book that everyone is raving about. It’s wickedly funny, brutally honest, and refreshingly, joyously, blunt. A born bestseller.

The A-List Diet & Fitness Plan (Luke Zocchi, Plum): From the fitness trainer that has worked with celebrities such as the Hemsworths, this book about meal preparation and efficient workouts is qualified to give advice.

Darwin in Photos (Elise Derwin, Hardie Grant Travel): There are many great photo collections of the Northern Territory, from Uluru to the coast, but this is by far the best for Darwin city, capturing the magic in the heart of Darwin.

The Land Before Avocado (Richard Glover, ABC Books): Thanks to a cracking radio interview with Richard Fidler, this book has simply disappeared from our shelves!

Malediction: The Cursed Play (Sean Guy, self-published): Inspired by the thespian superstitions of Macbeth, Malediction (which was launched here in the Territory) has already sold 200 copies in under three weeks!

Darwin 1869: The Second Northern Territory Expedition (self-published): Written by local historian Derek Pugh, this is the third in his series of Darwin histories. These truly engaging reads tell the wild stories of the early explorers in the Top End and their audience has no limits.

Witness to a Life (Matador): Written by local Stephen Baddeley, this novel of love and drama has proven to be a hit, and will make its way into many Christmas stockings.

Capriccio (Dina Davis, Cilento): Inspired by one of the most notorious love triangles in literary history, Capriccio is a novel that will have appeal Australia-wide. Set in London in the swinging sixties, it has already been praised by Thomas Keneally and many more!