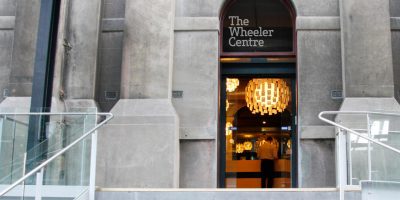 Established in 2010, The Wheeler Centre (TWC) podcast features full recordings of talks hosted in TWC building in Melbourne. TWC senior digital editor Jon Tjhia has been working on the organisation’s various in-house and collaborative podcasts since they first launched, including an ever-growing archive of their extensive talks and live events. In choosing not to produce a traditional ‘show’-y podcast that is hosted and narrated, Tjhia says, ‘I’m glad there’s a place for something a little rawer and less mediated in a marketplace of podcasts that can tend to anxiously over-manage listener attention.’ He spoke to Books+Publishing for our ‘podcast spotlight’ series.

TWC podcast gathers the best (and most audio-friendly) of our hundreds of talks each year, covering a ridiculously broad range of topics—from big questions to everyday life, and books, ideas, and writing in all its forms. The podcast occasionally features special episodes and in-depth mini-series.

I think there’s something deeply unusual about the variety and breadth of subjects, people and ideas that appear in our podcast—plus the emphasis, for the most part, on a full conversation. There are plenty of podcasts (and amongst them, podcasts of public talks and lectures) which present a tidied up package of ideas, but I think there’s a particular kind of value in hearing the best conversations unfold as they find their way to an idea.

I worked first as a producer at the ABC’s digital radio platform, Dig, then as a digital developer/producer at Radio Australia (their Asia-Pacific broadcast arm). From about 2005 or 2006, my team at the ABC began working on podcasts.

A couple of years later, I started making short audio packages as part of a DIY music competition we ran for musicians in the Pacific Islands, and began to better understand content-making. While American podcasts were starting to make a dent here—This American Life, Radiolab and others—Jessie Borrelle and I decided to start one that focussed on Australians and New Zealanders, called Paper Radio.

For the most part, it’s recorded at our live events—occasionally with some extra recording done around the office, or at my flat. Our production manager, Johnboy Davidson, has a really strong interest in making our live recordings sound great, and I think that really carries through—compared to most live-recorded events, we don’t really have to grapple that much with buzzing and bad microphone sounds and all the rest, and he’s constantly finding ways to get a balance between something that’s well-recorded and something that makes you feel like you’re present in the space. Other times, we record audio on location or via phones or computers. We can generally make it work.

As for our team … it’s complicated. TWC’s team of 22 are responsible for everything we do: talks, production, front-of-house, programming, marketing, fundraising, filming, recording, editing, digital. Obviously, all of that is important to producing the content of the recorded material. A couple of us work directly with editing and recording for our podcasts in different ways, depending on the format.

We recognise that people look to our podcast as a way to catch up on events they weren’t able to attend, and particularly in rural areas, as a way to remain connected to the public conversation about the stuff they care about. This is really exciting to us, and a key part of what we’re here to do—to be able to provide or improve access for people who aren’t otherwise able to get here physically for a variety of reasons.

A significant portion of listeners are from the Americas, which is a sign of the strong podcast literacy of their large population, as well as a heartening sign of the quality of our discussions, I hope.

Being a super regular feed, with one or 2 or 3 episodes per week, our listens per episode are pretty consistent. As for memorable? I think our session last year called ‘The Alt Write’ was a high point, pitting a handful of fascinating and different writers against the value of language and truth. In the past year, I’ve enjoyed the sessions with George Saunders and Armando Iannucci; an interview with Radiotopia’s Julie Shapiro; and a conversation between two emotionally literate writers, Maria Tumarkin and Sarah Sentilles. More recently, I found Sara Ahmed’s lecture ‘On Complaint’ quite spellbinding, and the same for ‘Ten Stories of Melbourne’.

But I’ve also loved episodes like Tin Cans—a collaboration with Digital Writers’ Festival—and our ‘Show of the Year’, for the colour they add with very different sounding episodes. Our standalone feature series—Better Off Dead, with Andrew Denton, and The Messenger, produced in partnership with Behind the Wire—have been popular and memorable too.

There’ll always be an important place for people trying to do interesting and perhaps counterintuitive things with podcasting, and those people are the most interesting to listening to. People have predicted a ceiling on growth, both in terms of audiences and advertisers or other forms of financial support, but we haven’t really seen it yet. I think perhaps the best one can do is wade in with open eyes; in most cases, observation trumps prediction.

A lot of the time, podcasting involves writing. Because the medium tends to favour the conversational, that process can be made somewhat invisible. We aim to recognise and support that work and are always interested in looking into the creative ways in which writers (or people who wouldn’t call themselves writers) approach and negotiate the process.

Thoughtfully produced audio can really open you up in ways other media, particularly visual media, struggles to do. Not that it’s a competition. But the strengths of audio are abstraction and directness are both pretty accessible to listeners (and producers).

We’re supported by a range of partners for all of our activities, and it’s been great to see the ways they understand our podcasts as a natural extension of what we do.

If we can find the extra time, we’d like to feature more podcast-only features and specials (like ‘Housekeeping’) and increase the amount of time we can spend on editing and mixing the podcast to improve how it sounds.

Coming up, we have a Brisbane-based writer, reading a short piece of humorous memoir in the studio; an adaptation of a story we’re publishing in our Notes section. I’d like to do more of that. We’re also looking for ways to fund the creation of full transcriptions of our episodes.

What other bookish podcasts should we be listening to, Australian or otherwise?

I don’t listen to tonnes of bookish podcasts regularly—it can amount to overload, given the work we do. I like podcasts that have a bit of a, erm, ‘writerly’ bent, though. Lately, that includes Sum of All Parts, Earshot, Re:sound, Short Cuts, Constellations, Scene On Radio, Awful Grace, The Paris Review, The Allusionist, The Organist and AWAYE!. Slate Culture Gabfest is always an easy go-to and I’m glad to see podcasts like Meanjin, Kill Your Darlings and Sisteria publishing new episodes. I’m not a completist. Like many people, I think what I want to listen to changes a lot with how I’m feeling, so it’s lucky we’re so spoiled for choice lately.

Celebrating in a pandemic: 30 years of independence at A&U  Features

Outer limits: Philip Bunting on ‘Give Me Some Space!’  Features

A most extraordinary year in books  Features