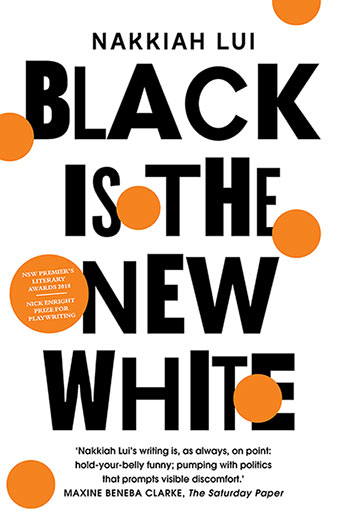 Black is the New White is the play script of a contemporary romantic comedy written for the stage by Gamillaroi and Torres Strait Islander woman Nakkiah Lui. Young couple Charlotte Gibson and Francis Smith are newly engaged. But their fathers are political rivals. Set in a luxurious holiday house, Black is the New White sees the Gibson and Smith families gather for Christmas lunch. Unexpected guests, sudden self-realisations and family secrets disrupt their meal. Described by Lui as ‘a homage to the family dramas of Australia’s past’, themes explored include land rights, contemporary politics, relationships, identity and class. The narrative attempts to challenge stereotypes of Aboriginal and Torres Strait Islander people, and relies on fast-paced dialogue and scenes that resemble modern-day reality television. Being published ahead of a 2019 season in Perth (September) and Adelaide (December), Black is the New White will appeal to Lui’s existing fan base, including upper secondary and university students studying Indigenous issues. Containing adult themes, strong language, nudity and drug use, the play script is suitable for readers aged sixteen years and over.

Karen Wyld is a freelance writer and author