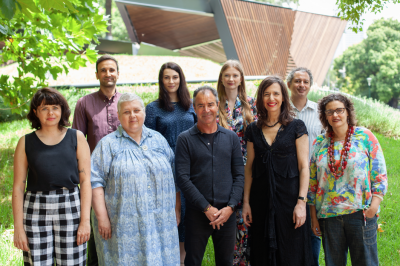 Writer, journalist and Iranian refugee Behrouz Boochani, currently detained on Manus Island, has won the $100,000 Victorian Prize for Literature for his book No Friend But the Mountains: Writing from Manus Prison (Picador) at this year’s Victorian Premier’s Literary Awards (VPLAs).

The book, which describes life in the Manus detention centre, was also awarded the $25,000 nonfiction prize. The judging panel called it a ‘stunning work of art and critical theory which evades simple description’.

‘The writing is beautiful and precise, blending literary traditions emanating from across the world, but particularly from within Kurdish practices. The clarity with which ideas and knowledge are expressed is also a triumph of literary translation, carried out by translator Omid Tofighian … Altogether, this is a demanding work of significant achievement. No Friend But the Mountains is a literary triumph, devastating and transcendent,’ said the judges’ report.

Like many other Australian literary awards, the entry guidelines for the VPLAs specify that authors must be Australian citizens or permanent residents to be eligible. On the recommendation of this year’s judges, the Wheeler Centre, which administers the awards, made an exception to the eligibility criteria for Boochani’s book to be considered. No Friend But the Mountains has already been deemed ineligible for the NSW Premier’s and the Walkley Awards.

Translator Omid Tofighian accepted the award on behalf of Boochani, who gave an acceptance speech via video.

The winners were announced at a ceremony in Melbourne on 31 January 2019. The winner of each category is awarded $25,000, except for the unpublished manuscript prize winner, who receives $15,000, and the winner of the people’s choice award, who is awarded $2000.

Winners were chosen from shortlists announced in December 2018. For more information about the awards, visit the Wheeler Centre website.