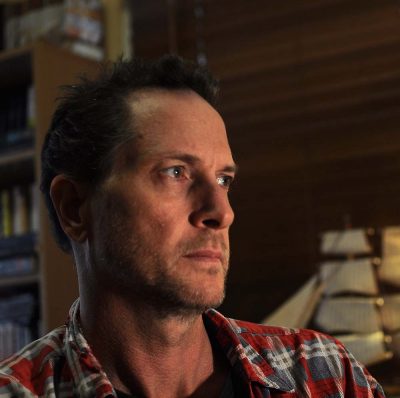 Born in the Queensland town of Dalby in 1966, McGahan grew up on the family farm, before moving to Brisbane in the early part of his adult life. He later moved to suburban Melbourne, where he lived with his partner for many years.

The first book in the ‘Ship Kings’ series, The Coming of the Whirlpool, was shortlisted for an Indie Award, an ABIA, an Aurealis Award, a Golden Inky and a 2012 CBCA award.

McGahan’s longtime publisher Allen & Unwin will be posthumously publishing his final adult novel, The Rich Man’s House, and his collection of short stories for children, Treasures of the Deep, set in the world of the Ship Kings.

Allen & Unwin said in a statement:

‘We are grieving the loss of an exceptionally talented writer, a loyal friend, and a most genuine, humble man, Andrew McGahan, who has passed away on Friday 1 February from pancreatic cancer … Famously reluctant to do publicity or make appearances, Andrew was an author who wanted his writing to speak for itself. He was a novelist who, rather than merely pushing the boundaries, recognised no boundaries of imagination. Any subject, any genre, any way of telling his stories was fair game.’

‘I know that Australia’s literary community and readers will join me in mourning the loss of Andrew. I will remember him for his fierce and intense intelligence, his kindness and generosity, his fascination with the natural world and his bravery in facing his diagnosis. He truly was the best of men.’