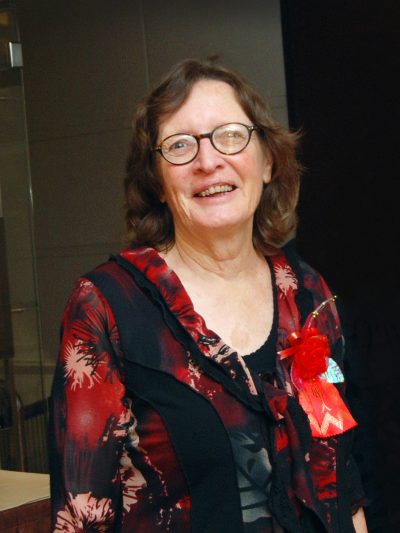 Born in Melbourne in 1947, Mackenzie graduated from the University of Melbourne with a Bachelor of Arts with honours in English Language before editing her first book for Melbourne University Publishing (MUP) in 1969.

A founding member and inaugural president of the Society of Editors Victoria (now Editors Victoria), she represented the society nationally and also helped to develop the national accreditation scheme for the Institute of Professional Editors (IPEd).

Mackenzie earned several awards, including the Barbara Ramsden Award from the Fellowship of Australian Writers for fiction or nonfiction editing in 1972; Distinguished Editor award IPEd (2008) and the George Robertson Award from the Australian Publishers Association (2010).

She also published a number of books, including The Editor’s Companion (Cambridge).

‘Janet Mackenzie was a visionary in every sense. She introduced original concepts and initiatives that were ahead of their time and implemented with sustainable frameworks.

‘Janet Mackenzie edited her first book in 1969 for Melbourne University Press. She attracted attention from the director who told her it was not becoming for a professional office girl to wear a pants suit to work. She was already showing signs of being ahead of the times, doing what seemed practical and natural to her. Within a few years Janet headed off to the UK with backpack and comfortable shoes where she took an editing job with prestigious publisher, Rutledge Keeting Paul.

‘Janet continued to work for some of the biggest university publishing houses in Australia and their English offshoots. This was the pre-technology era when coloured pencils were the traditional tool and, in Janet’s case, manuscripts were driven to the nearest post office through six gates along dirt tracks.

‘Janet’s quote from The Editor’s Companion delivers a fitting footnote: “Good editors may be likened to those crystal-clear prisms which form a vital part of a pair of binoculars. They are not there to alter the view or change the scene, but to make it clearer and closer.”’

‘Janet was a great friend and inspiring mentor to many editors at all stages of their careers, and a staunch advocate for the editing profession. She was instrumental in establishing IPEd, volunteering her services and support until just weeks before her death, and her service to Editors Victoria, now a branch of IPEd, spanned close to fifty years. We are proud to be establishing the Janet Mackenzie Medal for distinguished service to IPEd and the profession of editing.’

This obituary is an edited and condensed version of Joan Tehan’s obituary, which draws on eulogies from family, friends and colleagues.