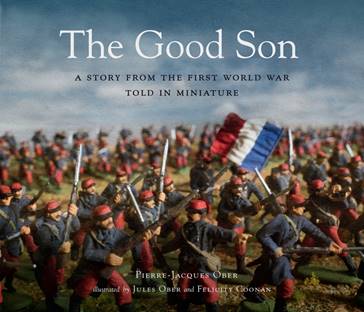 Due to be published in English in June as The Good Son: A Story from the First World War, Told in Miniature (Candlewick), Petit Soldat was awarded the Prix Carrement Beau Maxi (award for most beautiful book in the 9-12 age group).

Based in the Melbourne suburb of Northcote, the French-Australian couple created Petit Soldat with the help of designer, special effects artist and longtime friend Felicity Coonan, who is based in Sydney.

Set during Christmas time in 1914 as World War I rages, the book tells the story of a young French soldier named Pierre, who leaves his regiment to visit his family for two days and, upon returning, is imprisoned. Facing execution for desertion, he ponders the nature of patriotism, the horrors of war, the joys of friendship, and the love of family.

Pierre-Jacques Ober created the book as a 80th birthday present for his father. ‘I decided to create a series of images of my World War I figurines and models in memory of my grandfathers, both highly decorated soldiers,’ said Ober. His carefully constructed sets were then photographed by his wife, Jules, and Coonan helped the pair bring the story to book form.

Petit Soldat was selected for a shortlist of five titles in its category, among a total of six categories. The Prix Sorcières is an annual literary prize awarded in France since 1986 to works of children’s literature.