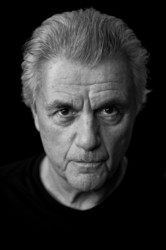 Darkness as a Bride, Irving’s 15th novel, follows a competitive Alpine skier and her writer son, and is set partially in Aspen, Colorado. Irving describes it as a ghost story but ‘also a novel about sexual politics’.

Scribner CEO and publisher Ian Chapman acquired UK and Commonwealth rights from Dean Cooke of CookeMcDermid in a three-book deal. Irving’s previous UK publisher was Transworld, a division of Penguin Random House, and he is currently published by Simon & Schuster in the US.

Chapman said of the acquisition: ‘What a pleasure and privilege it is for Scribner to become John’s UK publisher, and we look forward to launching Darkness as a Bride proudly in all our markets.’

Irving previously won a National Book Award for his novel The World According to Garp, which was later adapted into a film starring Robin Williams. Several of his novels have also been adapted, including The Cider House Rules, A Prayer for Owen Meany and The Hotel New Hampshire.

Darkness as a Bride is due to be released in 2020.