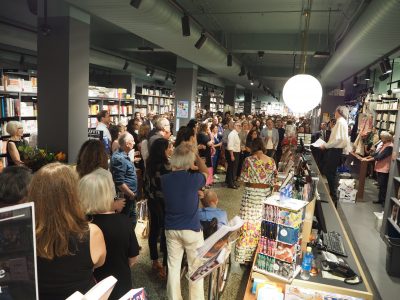 The original Readings bookshop was founded in Carlton in 1969 by Ross Reading, his wife Dot Reading, and their friend Peter Reid. In 1976 Mark Rubbo took over as owner and managing director after dropping out of a medicine course at university. Under Rubbo’s supervision, the business has grown to include seven stores across Melbourne, along with an online store.

Various writers spoke about what the anniversary of the store meant to them in a blog post here. Author Robert Manne said, ‘I have two homes—one in bush on the outskirts of Melbourne, the other in the thinking heart of the city, Readings in Carlton. I have been browsing, buying, listening and speaking there for the past fifty years. Its genius is to have adapted seamlessly to all the trends in the book trade and to have seen off any rivals while always, in essence, staying the same.’ Author Alex Miller said, ‘Readings has been enormously important to me personally and to me making my way as a writer and to finding the book I want when I want it.’

In 2009 Rubbo established the Readings Foundation, with 10% of the company’s annual profits supporting individuals and organisations that wish to further the development of literacy, community work and the arts. Readings also runs three prizes to support early-career authors: the Readings Prize for New Australian Fiction, the Readings Young Adult Book Prize and the Readings Children’s Book Prize.

Readings was the inaugural winner of the Bookstore of the Year Award at the 2016 London Book Fair International Excellence Awards.

For his service to Australian literature and supporting local writers, Rubbo was awarded a Medal of the Order of Australia in 2006 and was the recipient of the Emerging Philanthropy Leadership Award in 2018. Rubbo reflects on the history of the bookstore in a blog post here.