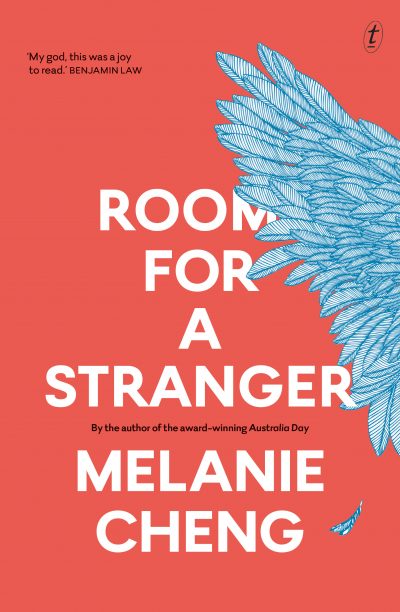 After an attempted home invasion leaves her feeling unsafe, elderly Meg signs on with a homeshare agency: Andy, an international student from Hong Kong who’s come to Melbourne to study biomedicine, will live with Meg in exchange for 10 hours of housework a week. Meg is grateful for the company, although Andy is less sure of his new living arrangement—Meg’s house is full of dust, and Andy can’t help but notice that the old lady doesn’t wash her hands after handling her pet parrot, Atticus. But Meg and Andy soon discover they have more in common than they realise—and their tentative friendship will affect both their lives in unexpected ways. The chapters alternate between the two characters’ perspectives, and Melanie Cheng skilfully weaves together their seemingly disparate experiences—Meg’s memories of her dead sister and complicated relationship with her oldest friend, Andy’s fear of failing his exams and the desperate actions he takes—to create a quiet exploration of loneliness and loss. Those who enjoyed Cheng’s award-winning short story collection Australia Day will recognise similar themes at play here: the casual racism of white Australia, the human need to belong, and the complexity and compromise inherent in family relationships. Room for a Stranger is an impressive and delicately crafted novel from one of Australia’s most talented new voices.

Carody Culver is a freelance writer and editor and former bookseller. She currently works at the State Library of Queensland