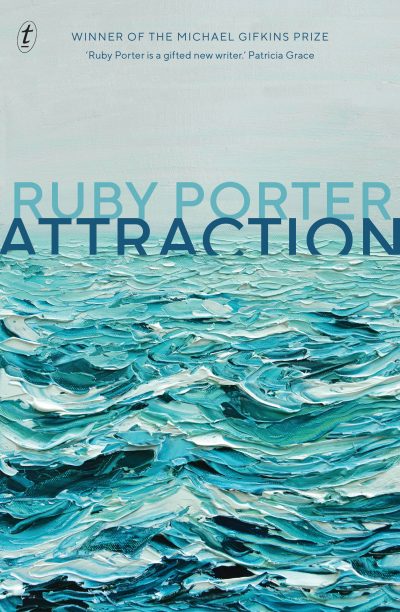 Auckland-based writer Ruby Porter’s debut novel Attraction, winner of the inaugural Michael Gifkins Prize for an unpublished novel, is a melancholic and haunting meditation on postcolonial guilt and the stories we tell ourselves in order to keep going. The unnamed narrator at the centre of Porter’s narrative embarks on a road trip with her best friend, Ashi, and her sort-of girlfriend, Ilana, to her family bach, the New Zealand equivalent of a modest family home. Attraction is steeped in such cultural references, firmly rooting it in a particular time and place—the characters’ dialogue and recollections are peppered with Māori words and Kiwi slang as they journey between cities that have been subsumed by white settler names such as Auckland and Levin. The North Island’s landscape is sketched with meticulous detail—the white and lined sandstone cliffs are contrasted with deserts rich in pumice, tussock and ash, each location serving as a reminder of how the narrator takes up room on stolen land that will never be hers. At times, the opaque narrator falters beneath the weight of the story, which becomes a vessel for the exploration of disparate social issues, from sexuality, mental illness and chronic pain to intergenerational trauma and poverty. But at its heart, Attraction is a novel about the weight of personal history and will appeal to readers of postcolonial stories and queer novels.