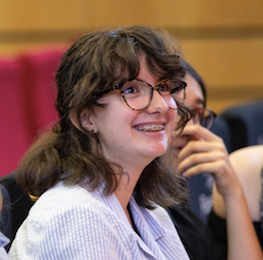 A love letter to the Centre for Youth Literature: Zhana Maticevski-Shumack on the closure of CYL

State Library Victoria’s controversial announcement in early March that it was ‘retiring’ the Centre for Youth Literature (CYL) was met with backlash from across the literary community. In this opinion piece, year 12 student and former CYL Youth Advisory Board member Zhana Maticevski-Shumack expresses what its closure means to her.

When I discovered that the Centre for Youth Literature was being retired, I was alarmed, saddened and confused. I didn’t find out about it from my bookish friends, from social media or from anywhere where I, and other young people, obtain book-related news. I found out about the discontinuation of CYL via an email from my friend and coordinator of a program I was part of, Fiona Spitzkowsky. I would not have found out about CYL’s closure if I hadn’t been part of a select few people that received that email. Nor would any other teenagers, as this decision has been made for youth rather than with youth. There wasn’t any communication about this decision; we have not been part of the narrative. It’s our community and we deserve a say.

I was part of the Youth Advisory Board (called the Dog Advisory Board or DAB) for the rebooting of the website Inside a Dog, run by CYL through the State Library Victoria, a valuable program that I am forever grateful for. The DAB are some of my closest friends. Having a group of like-minded individuals to talk to, not just about books, but also having fellow queer-identifying youth to relate to, has crafted my teenage years and my identity. From empathising with the struggles of school and teenager-hood to having a larger understanding of the importance of racial diversity from listening to the stories of some of the members, CYL gave me and so many other teenagers across Australia connection in a world we felt disconnected from. Fiona ran and coordinated the launch of the site in early February. I, and the other members of the DAB, received an email informing us of her departure not long after. This leads me to believe I might have been part of one of the last programs that CYL ran before its closure. I don’t want to be one of the last teenagers to be impacted by the amazing programs I’ve been part of.

I believe that losing CYL will lead to many other decisions that will badly affect youth programming, as it will not be prioritised from here on out. These include not hiring or having roles for experts in the area of youth literature, which will result in a lack of knowledge and understanding channelled into youth programming and projects. Without a centre there will be less of a youth voice, with no-one to represent us because programs relating directly to YA literature will be grouped into overall library programs. Without YA expertise, there won’t be the passion for youth programs, which will result in dwindling numbers of teenagers getting involved. The slow erasure of places for teenagers to discuss and express their love for books will eventually mean the erasure of young voices from literature and book communities entirely. The discontinuation of CYL will disconnect us from a world in which we feel like we belong.

It is already difficult for young people to access literature: books are expensive and the process of obtaining a library card can be convoluted for someone under the age of 18. This is not to mention the lack of youth programs in Melbourne public libraries. CYL was leading youth voices in literature across Australia and there will be major repercussions due to its closure. It might not look like much now, but over time this will affect Inside a Dog, the Inky Awards and other youth programs. These programs are important and should continue no matter the state of the library. However, the expertise hired as part of CYL is irreplaceable and the loss of these roles will have major effects on youth literature programs in years to come.

Love for reading not only should—but needs—to be kept alive, especially with us teenagers. Diverse books teach us empathy and kindness, show us identities we didn’t know existed, and reflect our own personal struggles. YA literature and books in general are a way to relax, calm down and chill out from a world that’s constantly going-going-going all the time. It’s important that teenagers have these moments of pause in a hectic world of school life, social life and personal struggles. Having a place where I can talk and connect with other teenagers about the books that have crafted my identity has helped me reflect and understand others better, and to articulate all the complex thoughts and growth I’m going through as a teenager. I could only ever want that for every other teenager as well.

CYL is ending and I say goodbye. Goodbye to a beautiful and intelligent community. Goodbye to the place where I could connect and feel safe expressing myself. Goodbye to the opportunities. This is a love letter to the Centre of Youth Literature: I would not be who I am today without you. You will be missed.

Zhana Maticevski-Shumack is a year 12 student and YA enthusiast

At your service: Nic Bottomley on creative bookselling