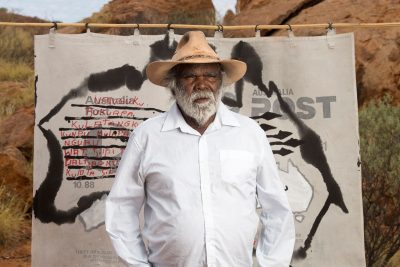 Artist, activist and author Kunmanara Williams has died, aged 68. Born in 1952 between Kenmore Park and Pukatja in South Australia, Williams won numerous art prizes and his work has been exhibited in galleries across the country. Based in Mimili, South Australia, Williams was instrumental in the APY Land Rights movement, which led to the signing of the Pitjantjatjara Land Rights Act 1981 and the return of land to Anangu traditional owners. He also played a role in the transition of Mimili Maku Arts, where he worked, to an independent Aboriginal-owned and governed organisation.

Williams’ forthcoming book Kulinmaya! Keep Listening Everybody! is due to be published by Allen & Unwin in August. He is survived by his wife, artist Tuppy Goodwin.

‘The much-loved Mimili-based Elder, artist and land rights activist was best known for repurposing Australia Post mailbags as political artworks, stretched on traditional spears. His arresting three-panel work Kamantaku Tjukurpa wiya (The Government doesn’t have Tjukurpa) is currently showing as part of ‘The National 2019: New Australian Art’ at the MCA and appears in the book as a four-page fold-out.

‘Written in Pitjantjatjara and English, and containing many examples of Mr Williams’ potent artwork, the book provides a unique insight into the cultural, historical and political circumstances that led him to become an artist and which propelled his arts practice.

‘Mr Williams was passionate that his book be read by children and teenagers, politicians and teachers, and people everywhere. It is a book for all Australians and an extraordinary legacy to an extraordinary man.’

‘Despite the fact he spent much of the past twelve months in hospital, he continued to fervently work towards his biggest projects to date. Mr Williams realised his largest and most political artwork, reflecting his resolute desire to be heard. This desire equally manifested in Kulinmaya!, a book project that continued to grow with his ambitions and deep knowledge. Mr Williams had much to say, and we better all listen up.

‘Sadly, he will not be witness to the unveiling of his work as part of The National at the MCA, or the launch of his book Kulinmaya! later this year. However, his powerful voice and legacy remain for us to heed.’