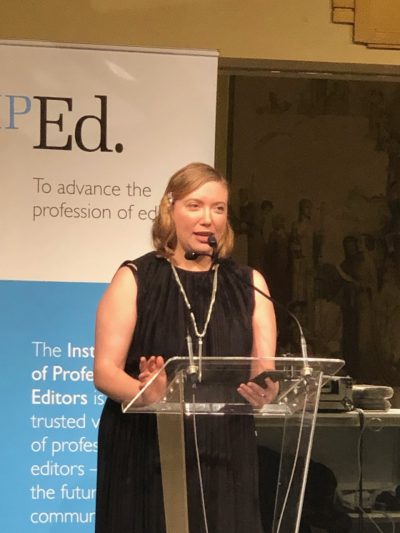 Julia Carlomagno has won the 2019 Rosanne Fitzgibbon Editorial Award, known as the ‘Rosie’, for her work on Adult Fantasy (Briohny Doyle, Scribe).

Judges described Adult Fantasy as ‘a brilliant blend of memoir, sociology, pop culture and journalism’ and added that Carlomagno ‘fostered Doyle’s ability to write in this new genre’.

‘Carlomagno supported Doyle every step of her writing journey and helped the author grow into a mature writer who has gone on to become the voice of her generation,’ said the judges. She ‘demonstrated a thoroughness and consistency throughout the project. Working with the author after each chapter was completed and then arranging the work structurally when it was completed.’

Scribe senior editor David Golding said Carlomagno ‘developed a short piece—an essay about the work of a marriage celebrant—into an accomplished book that speaks to our times’.

As editor of two of the three works on the shortlist, Carlomagno was presented with the award at the Institute of Professional Editors (IPEd) Conference dinner, held in Myer Mural Hall in Melbourne.

‘It is validating to have an award that acknowledges editors, and the value that editors bring to a work,’ said Carlomagno.

The $4000 award recognises editorial excellence and is based on the quality of the finished work, as well as contributions from the editor, author and publisher about the editorial process.