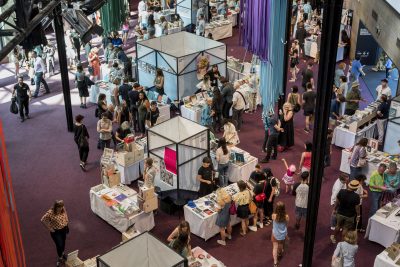 Galleys and galleries: The art and design book market

Art gallery attendance has been increasing in Australia over the past decade. The first Australia Council National Arts Participation Survey reported that between 2009 and 2010 40% of the Australian population, or 11 million people, visited an art gallery—a million more than the attendance at the AFL that season. That number increased to 46% of the population in 2017. Last year, the National Gallery of Victoria (NGV) announced that Triennial was the most successful exhibition in its 157-year history, with just over 1.2 million visitors during its 122-day run.

Data from Nielsen BookScan from 2017 to 2018 shows the category grew by around 28%, increasing from $23.8 million to $30.3 million in value (taking into account Nielsen’s recent addition of a number of retailers to its data collection pool).

‘Attendances are up and art book sales are also up,’ says Art Gallery of NSW Gallery Shop book buyer and wholesale administrator Cassandra Willis. ‘I think this is to do with the publishing industry getting back on its feet after the GFC. They seem to be taking more risks and producing beautiful books—it was quite boring for a while.’

State of the art

There aren’t many large art book publishers in Australia. UK-owned Thames & Hudson and state-funded galleries such as the NGV are the biggest producers of publications by local artists—and most Australian trade publishers tend to avoid producing expensive illustrated art and design books.

Thames & Hudson Australia managing director Daniel Watts concedes that publishing these kinds of books is a challenge, even for a publisher that specialises in art and design. ‘Illustrated books—particularly high-quality books in the visual arts—are usually very expensive to produce and very expensive to move,’ says Watts. ‘Production costs can easily be 10 times that of a paperback publication. Meanwhile, freight costs increase exponentially as well. Combine this with the fact that we are usually working with smaller volumes of sales it can be a challenge to reach viable print runs.’

Holly Bennett, who administers the Art Gallery of NSW online shop, agrees that high costs limit the Australian commercial market. Consequently, many local artists’ books are produced by galleries. ‘The major public galleries have a certain portion of their resources dedicated to furthering art scholarship and publishing, so many quality Australian art books are produced in conjunction with exhibitions or collection works,’ says Bennett.

Nonetheless, according to Watts, supporting Australian artists is a fundamental aspect of Thames & Hudson’s business. Its local list—the company publishes about 30 original Australian titles per year—is at the centre of its growth strategy for 2019. There are also signs that Australian artists are gaining trade publishers’ support—Black Inc. has recently renewed focus on its art and design imprint Schwartz City. ‘People are increasingly recognising the importance of art and design books as resources, as a form of artistic production, and as art and design objects in and of themselves,’ says Schwartz City imprint manager Sarah McCauley.

According to NGV head of publications Megan Patty, NGV’s list includes artist monographs, exhibition publications, scholarly publications and children’s books, as well as an online list that includes a scholarly journal, longform essays and ebooks. Its distribution is handled by Thames & Hudson, which also handles the distribution of over 100 smaller art publishers in Australia. Watts says this wide scope makes Thames & Hudson an attractive prospect for publishers.

In contrast, Sonya Jeffery, owner of independent Melbourne distributor Books at Manic, says that a small list works for her business. Books at Manic typically has around 20 local and international publishers on its list at any one time. Jeffery says her team’s expertise and connection to the Melbourne art scene allows the company to support very small local presses. ‘We can boost sales because we’re focused and our list isn’t too big,’ says Jeffery. ‘We’re small enough that we can be quite versatile.’

Schwartz City recently moved its distribution from United Book Distributors to Books at Manic. ‘Given the specialist nature of our books and the attention to detail that goes into their production, Schwartz City usually releases only a few titles each year,’ says McCauley. ‘We felt that it was important to choose a smaller distributor that would be able to afford our titles the same degree of attentiveness.’

‘I don’t think the sector is getting bigger—parts have shrunk and new parts have developed. It’s changing,’ says Jeffery, who has been working with art and design books since 1984. ‘There’s been a revolution in independent art and photo book publishing in Australia,’ she says, citing very small, innovative Melbourne-based publishers Uro Publications and Creative Minds Publishing.

Despite this, ‘It’s a double-edged sword,’ Jeffery notes. She observes that since the GFC, booksellers are more conservative in their buying. ‘People used to be able to sell a lot of books to architecture firms and graphic designers. I think because of online [retailing] and also professionals having less money, that isn’t as strong as it used to be.’

Willis and Bennett acknowledge that while smaller publishers and artists are harder to sell at the gallery shop, ‘blockbuster’ exhibitions do help with book sales. ‘“Blockbuster” shows are also usually centred around artists or art movements that have been well covered by art publishing, so most of the time they mean that Cassandra has a lot of options for buying,’ says Bennett. ‘Smaller shows can be a great opportunity to drive interest in under-
appreciated or emerging artists, but with fewer publications in existence or in print, it can be harder to make that sales connection.’

The Melbourne Art Book Fair was established in 2015 as a local counterpart to the art book fairs of Tokyo, New York and Los Angeles and is held at and produced by the NGV. Patty says the fair has created a new platform to support smaller, innovative publishers. ‘Through the curation of the fair we have seen the art and design sector grow, new imprints start, artists and designers self-publishing titles, and larger imprints expand their list.’

The additional exposure is also good for distributors such as Books at Manic, which runs stands at the fair for some of its publishers, alongside its own stand. ‘It helps us put out to the public some books that the bookstores don’t support very well,’ says Jeffery. Art book fairs are also helpful for book buyers: ‘I am always on the lookout for new titles and often go to markets and fairs to find new gems,’ says Willis.

The future of art and design publishing in Australia seems contingent on innovative ways of retailing. Last year, Art Gallery of NSW Gallery Shop launched an Art Gallery Book Club, which focuses on fiction that has a connection to the art world. Bennett says the shop has also been strengthening its links to the bookselling world, with book-and-art-themed celebrations for Love Your Bookshop Day and Museum Store Sunday.

Jeffery also plans to attend the Big Design Trade fair in Melbourne this year to explore new retailing opportunities. ‘We sell into less traditional channels,’ she says. ‘We don’t just sell into the book market but we sell into galleries, design shops, the gift area.’

And who is buying the books? According to Watts, 65% of Thames & Hudson’s readers are female—divided into baby boomers, 30-50-year-old ‘creatives’ and ‘urban mothers’. Willis and Bennett report that the gallery shop’s most regular customers are gallery members—Sydney-based women over 55. Jeffery concedes this is an issue within the industry: ‘You’ve always got the problem that actual artists often can’t afford to buy books and the people interested in them can’t afford them—especially when they’re imported and you’ve got all these extra freight and GST costs added on.’

However, Willis and Bennett dismiss the idea that there is a ‘stereotypical’ art consumer. They see the gallery shop as playing an important role in fostering art appreciation from people not traditionally associated with the art world. ‘It’s really important to have engaging and accessible books that don’t assume a level of prior knowledge,’ says Bennett. ‘We foster that curiosity in the beginning. We build the trust for people to come back for more in-depth books.’

Kelsey Oldham is an editor at Books+Publishing