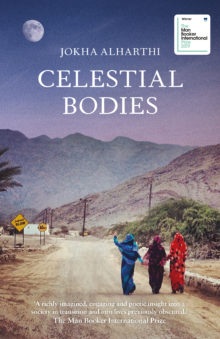 Alharthi is the first winner from the Arabian Gulf and is also the first female Omani author to be translated into English. The £50,000 (A$92,260) prize money will be shared equally between Alharthi and Booth, who will each receive £25,000 (A$46,130). Each shortlisted author and translator also receive a further £1000 (A$1845) for being shortlisted.

Set in the Omani village of al-Awafi, Celestial Bodies follows the lives of three sisters who ‘witness Oman evolve from a traditional, slave-owning society slowly redefining itself after the colonial era, to the crossroads of its complex present’.

‘Through the different tentacles of people’s lives and loves and losses we come to learn about this society—all its degrees, from the very poorest of the slave families working there to those making money through the advent of a new wealth in Oman and Muscat,’ chair of judges Bettany Hughes told the Guardian. ‘It starts in a room and ends in a world.’

Chosen from a shortlist of six, which includes a novel by last year’s winner Olga Tokarczuk, Celestial Bodies previously won the Best Omani Novel Award in 2010.