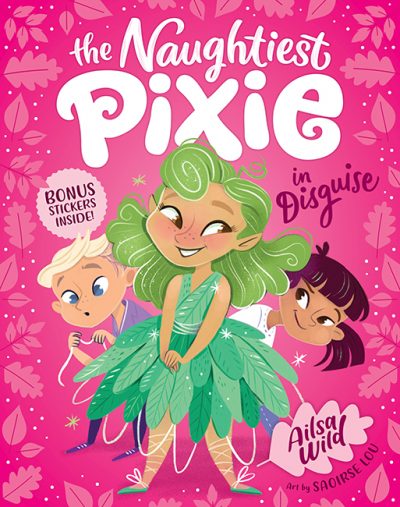 The Naughtiest Pixie in Disguise is the first book in a second series by Ailsa Wild, following her hugely successful Squishy Taylor series. Naughty, charming young pixie Jenifry Star lives in the park by the Pixie Woods with her nanna, visited only by Kipsy-cat and Robyn Red, and her seven aunts. Jenifry is lonely; baby pixies don’t hatch very often and there are no other pixie families nearby. All Jenifry wants is to make friends with some small humans, and what better place to meet them than at school? Ignoring Nanna’s warnings about dangerous grown-up humans trapping pixies and pickling them in jars, audacious Jenifry casts a glamour spell, disguises herself as a human and trots off to school. With new friends Oscar and Aniko by her side, Jenifry attempts to navigate the bewildering rules of school and human relationships. Young readers will love the series of chuckle-worthy encounters that follow, which often have children innocently defying grown-ups. Saoirse Lou’s simple and lively illustrations perfectly capture Jenifry’s charm and mischievousness and break up the text, making this an approachable read for those aged six and up. The Naughtiest Pixie in Disguise is a delightful celebration of friendship, individuality and nature perfect for fans of The Magic Faraway Tree and The Worst Witch.