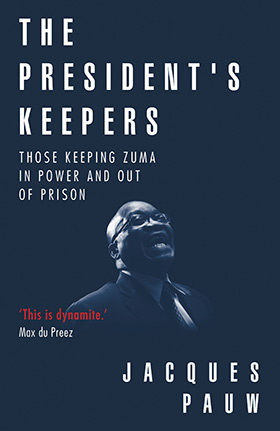 In South Africa, NB Publishers has been awarded the Association of American Publishers’ (AAP) International Freedom to Publish Award for its book The President’s Keepers by investigative journalist Jacques Pauw.

The annual award recognises a publisher outside of the United States that has demonstrated ‘courage and fortitude in defending freedom of expression’.

The President’s Keepers is an expose of former South African president Jacob Zuma that the company published ‘despite the relentless threats that they expected and continue to experience from various state apparatus’, according to AAP president and CEO Maria A Pallante.

NB publisher Eloise Wessels said: ‘We knew, when we decided to publish The President’s Keepers, that we were taking an enormous risk. The main subject of our book held the highest power in the country. We had to edit, typeset, print, and distribute the book in the utmost secrecy to ensure that we would not be prevented from doing so before the stock was in the shops.

‘It was when our parliamentarians and vice president at the time (now our newly elected president) walked into parliament holding copies of the book in their hands that we realised that this book had a chance of making a real difference. While, even now, we continue to face legal action, it has all been worth it.’

For more information about the award and this year’s winner, visit the AAP website.