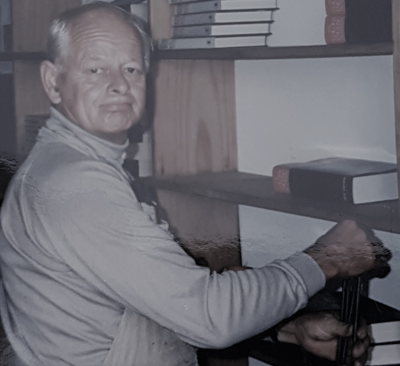 Robinson and his wife Moira opened Robinsons Bookshop in Frankston, on Victoria’s Mornington Peninsula, in 1963. They owned and operated the shop for 29 years before selling it to Terry and Monica Perry in 1992. Susanne Horman bought the bookshop in 2007 and opened a second store five years later, expanding the Robinsons business into a chain of 12 stores across Victoria, Tasmania and the ACT.

‘Philip Robinson passed away peacefully surrounded by family and friends on Monday night after a short illness. Philip was in his 90s and was a pioneer of bookselling in Australia. I was lucky to have lunch with him a couple of years ago and he was full of stories of the industry and showed me lots of photos of the early days.

‘To this day customers visiting the store mention Moira and Philip with great fondness and there is great support in the community for both of them and for what they have done together to bring books to the people of Melbourne.’

‘Back in 1963, Philip and his wife Moira opened Robinsons Bookshop in Frankston’s former Central Park. Back then, the Frankston Library was yet to be established, so it was a rare treat to find a bookshop anywhere. In fact, Robinsons is the oldest general independent bookshop in Victoria.

‘On behalf of Frankston City Council, I would like to offer my condolences to Mr Robinson’s family and friends during this difficult time.

‘Thank you for creating an iconic and much-loved bookstore for us all to enjoy, and thank you to current owner, Susanne Horman for keeping Mr Robinson’s legacy alive and well.’