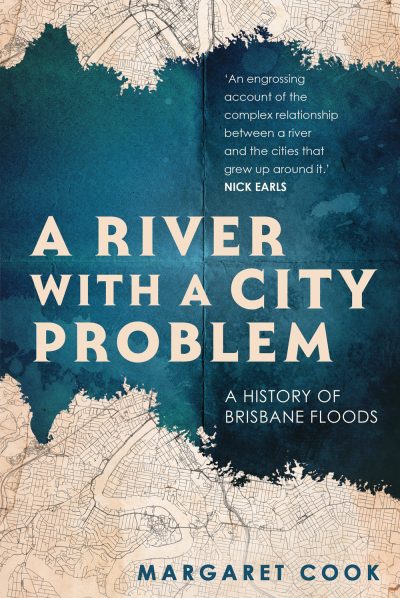 A River with a City Problem: A history of Brisbane floods (Margaret Cook, UQP)

Who can forget the image of a disheveled Premier Anna Bligh, in the midst of the devastating 2011 Brisbane floods, making her ‘We are Queenslanders’ speech? In the aptly titled new book A River with a City Problem, historian Margaret Cook shows how this widely praised speech is actually part of a near 200-year-long problem. Through a detailed analysis of Brisbane’s worst floods of 1893, 1974 and 2011, Cook reveals how Australia’s third most populous city—settled originally within one of the folds of the serpentine Brisbane River and currently with 43 of its 185 suburbs claiming riverside land—has consistently failed to implement sensible floodplain management policies, condemning an ever-increasing population to periodic catastrophic floods. Cook crafts an illuminating narrative that is hard to put down, and in the process builds a convincing case against the real culprit: leaders who for economic gain have exploited the population’s short-term memory, due to the episodic nature of floods, while promoting the arrogant belief that man can control nature and that dams are the answer to flood control. This clear-sighted examination of Brisbane’s intractable flood history offers hope that change is still possible. Readers of other recent books about Australia’s history, society and environment, such as Dark Emu and Call of the Reed Warbler, will enjoy this book.

Julia Taylor has worked for many years in trade publishing