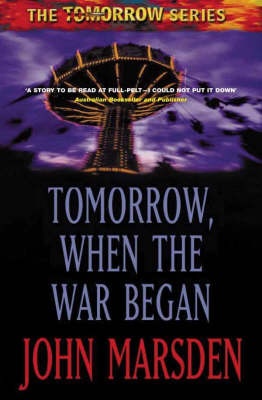 Is YA okay?: The state of Australian young adult literature

With reports from the UK showing a sharp decline in sales of  YA fiction, Jackie Tang explores whether the Australian market is experiencing similar changes.

When UK trade publication the Bookseller reported a 26.1% decline in sales by volume of young adult (YA) fiction in 2018, it caused waves in the British publishing industry. The Australian YA community has also faced recent setbacks, with grassroots movement #LoveOzYA raising the possibility of disbanding its organising committee, and State Library Victoria (SLV) announcing that the Centre for Youth Literature would be ‘retired’ and brought under general SLV programming. Sales-wise, however, Australia’s YA market is faring better than the UK’s, although not enough to exhibit growth. Nielsen BookScan figures for the Australian market reveal a decline of 1.4% by volume for YA in 2018 (1.8m units) compared to 2017 (1.82m), and a larger dip of 9.8% in volume over the past five years.

With this in mind, there is also the question of how Australian-authored titles are performing. Books+Publishing’s internationally facing newsletter, Think Australian, has reported the top 10 Australian YA bestsellers (for the period between July of the previous year to June of the current year) for the last decade. These figures reveal that sales of Australian bestsellers have fluctuated in the last five years, but have dropped significantly in the last 10. From July 2017 to June 2018, the top 10 Australian YA titles sold a combined total of 50,000 units (rounded to the nearest thousand), up 11% on the year before, when the top 10 sold a combined 45,000 units. Last year was also up 8.7% on sales from five years ago (where there was a combined total of 46,000 units) but was down 35.9% compared to 10 years ago (78,000 units). 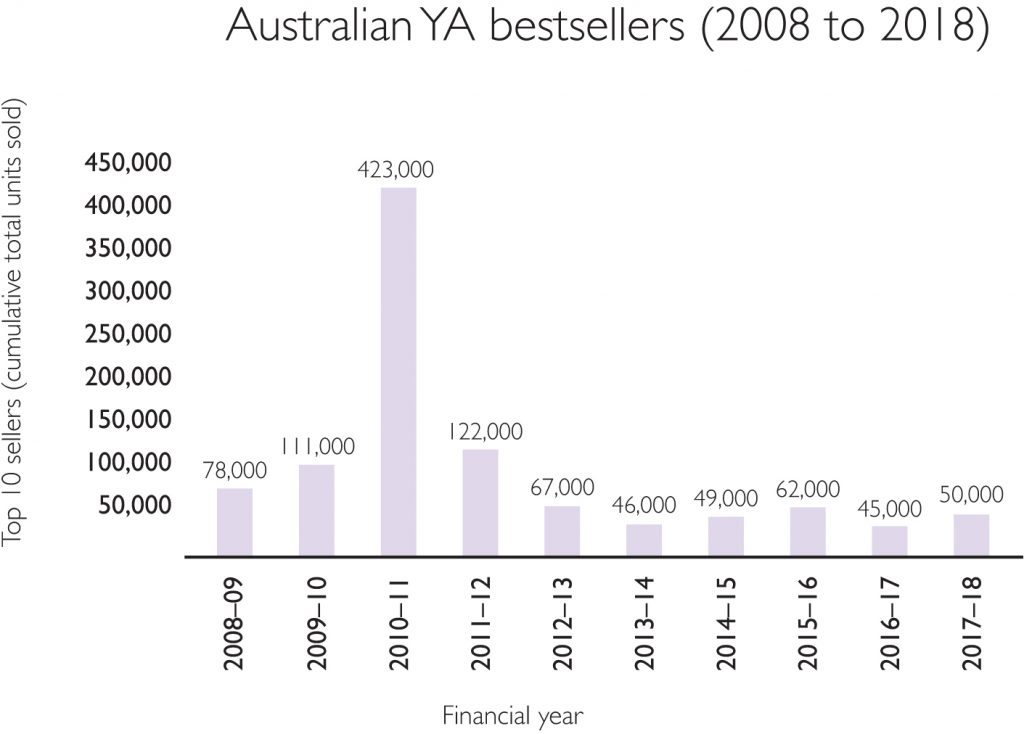 For Eva Mills, publishing director of children’s and YA books at Allen & Unwin, the dip in sales over the past decade reflects trends in the overall YA market, where the incredible success of a few franchises (Harry Potter, Twilight, The Hunger Games) has not been replicated in the past couple of years. ‘Nothing has quite reached those heights recently,’ says Mills, though ‘this could turn around again quite significantly with a wildly successful film tie-in series’.

Kristin Gill, publishing manager for young readers at Penguin Random House Australia, echoes this feeling. ‘In the past 10 years, we’ve seen the market fluctuate year on year depending on book-related activity in the film and TV sector,’ she says, pointing to the 2014 film adaptation of John Green’s The Fault in Our Stars (Penguin) as a noteworthy high point. ‘More recently, [the Netflix adaptations of] 13 Reasons Why (Jay Asher, Puffin) and Love, Simon (Becky Albertalli, Puffin) have impacted sales patterns but as a rule, without this level of support, it is a challenge to replicate those kinds of sales.’

Many people in publishing see the relationship between books and film/TV as simultaneously beneficial and competitive. ‘There is no denying the impact of devices, online gaming, YouTube and streaming services on the available leisure time of [teenagers],’ says Gill. ‘Books and reading compete head-on with these activities. The flip side of that is that a decent film or TV version of a book appearing on any of those channels, or publishing a popular vlogger’s book, can all lead to considerable sales.’

Danielle Binks, literary agent at Jacinta di Mase Management, sees the rise of film and TV adaptations as the key change in YA publishing in the past decade. ‘That has been the biggest change—that YA suddenly became this money maker and could influence other forms of media like never before,’ says Binks. ‘And it wasn’t just teenagers reading these books, but everyone. Suddenly those book sales just exploded and really seemed to eclipse anyone else writing that didn’t have the Hollywood machine behind them.’

Binks continues, ‘In all these instances, it’s a very concentrated American success. [The trend’s] proximity to the Hollywood juggernaut results in what are ultimately very American novels getting turned into very American media.’

There is perhaps only one local example of this trend: the 2010 film adaptation of John Marsden’s 1993 novel Tomorrow When the War Began (Pan). According to Think Australian, its release skyrocketed the book’s sales to 94,000 copies (between July 2010 and June 2011), making it the bestselling Australian YA title of 2010–11. Furthermore, each one of the seven books in Marsden’s ‘Tomorrow’ series—which were all published in the 1990s—sold more than 35,000 units that year, pushing the combined total of the 2010–11 top 10 to an astronomical 423,000 units. In comparison, the next highest total across the last decade was 122,000 units in 2011–12.

Marsden aside, Mills says the dominance of American YA is something local publishers have always contended with, but she is hesitant to quantify the impact of big US titles on Australian sales trends. ‘Our own list shows fluctuations over time, and one big [Australian] success can make all the difference,’ she says. ‘If there’s a drop-off, I feel it’s reflective of the overall book market rather than a particular loss of interest in Australian authors. In fact, we’ve seen that [an] Australian author with a US publisher and lots of international and online buzz can do well.’

Binks feels passionately about the subject of ‘online buzz’ and argues that a lack of investment in marketing and publicity by publishing houses, as well as diminishing coverage in the media, could further harm sales of Australian YA. ‘Most publishers who were making great strides with online marketing and social media outreach in the mid-2000s have all but abandoned those avenues or else not kept adapting them to reach the next (read: current) generation of teens,’ says Binks. She worries that by sticking with established marketing blueprints, publishers primarily reach older adults and people in their mid-20s—‘those who were once teens or young adults and were the first generation to follow that brand’—rather than teenagers today. ‘You have to find the next thing. And you don’t get that by cutting your teams and not letting them play and experiment within this media landscape.’

The issue at hand

In the UK, some industry figures argue that the sharp sales decline in YA is due to an over-saturation of ‘issues’ books or ‘books that make worthy topical subjects the focus of the story’, as defined by UK author and school librarian Lucy Ivison. Binks believes this is less of a problem in Australia but notes there is a tension between ‘the commercial arm of YA’ and ‘the school curriculum side of things’. ‘I don’t necessarily think [books] that appeal more to being studied are necessarily “issues” books, but when you see the stuff that is selling at a huge commercial rate (Lynette Noni and Sarah J Maas for example) you can see where the disparity is,’ says Binks. ‘Very few authors can walk the tightrope between both.’

Karys McEwen is school library manager at Melbourne’s Prahran and Richmond high schools. She feels ‘issues’ books tend to be cast aside by the students she works with, but says Australian publishers are ‘getting better and better at staying away from that trope’, citing Take Three Girls (Cath Crowley, Simmone Howell & Fiona Wood, Pan) as an example of a title that treads the ‘fine line’ between ‘books that young people want to read and books that win awards/are significant in a broader sense’.

The schools market may also be more difficult to capture now, with more librarians moving towards curating their library collections in response to what their students want, rather than buying large quantities of an established title. ‘In my experience, collection development has become more heavily curated, a more deliberate process,’ says McEwen. ‘I believe this is a really important responsibility for school librarians—to have a good knowledge of what is out there and what the kids want.’

‘Funding affects this,’ she adds. ‘With smaller budgets, we have to be smarter about what we buy, so it pays to make good, considered decisions. It is also important to listen to young people and make sure they know their requests are the number-one priority.’

Kate De Koning from Victoria-based school supplier Lamont Books observes that Lamont’s school library accounts are ordering a ‘really wide range of titles’, though she adds that YA sales have stayed ‘relatively consistent’ in the past few years. ‘There is so much variety on offer in [YA] these days,’ says De Koning.

This diversification is also borne out in the past decade of Australian YA bestsellers, with backlist titles that were either curriculum choices or trusted classics slowly disappearing from the Think Australian top 10s. Ten years ago, half of the YA top 10 were books from the 1980s and 1990s: Obernewtyn (Isobelle Carmody, Penguin, 1986); Looking for Alibrandi (Melina Marchetta, Penguin, 1992); and John Marsden’s The Third Day, the Frost, The Dead of the Night and Darkness Be My Friend (all Pan, 1994, 1995, 1996). Compare this to 2017–18, where all the titles in the top 10 were published in the last three years.

McEwen believes this is partly due to a more diverse selection of published YA, but also stresses that teenagers are now increasingly tracking down the books they want online and on social media. ‘When I was young, I generally accepted what adults gave me to read, but young people today seem to know the stories they want to read and use specifics to ask for what they want. I get so many detailed requests.’ Ultimately, she says, ‘Publishers should keep in mind that young people know what they want—so they should get out there and ask them.’

Jackie Tang is a freelance writer and editor, and a bookseller at Readings

Booksellers celebrate LYBD in and out of lockdown  Features

Stephanie Parkyn on ‘The Freedom of Birds’