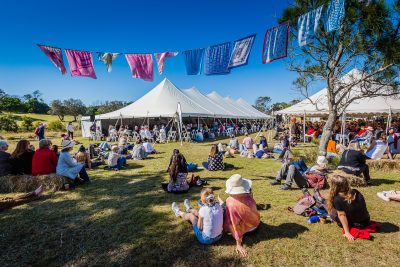 This year’s Byron Writers Festival attracted the highest box office sales in its 23-year history, according to event organisers.

In its 23rd year, Byron Writers Festival hosted more than 140 local and international guests across 121 on-site events, 17 off-site events, 15 workshops, a schools program for primary- and secondary-school students, and a road trip to regional towns. The festival again partnered with the Indigenous Literacy Foundation, and raised more than $8000 for the charity.

Festival director Edwina Johnson said her personal highlight was the appearance of Boochani via live stream from Manus Island. ‘There are always so many highlights but this year the power and emotion in the room at Behrouz Boochani’s session (appearing via live stream from Manus Island) with his wonderful collaborator and translator Omid Tofighian—that will stay with me forever,’ said Johnson.

The bestselling books were: