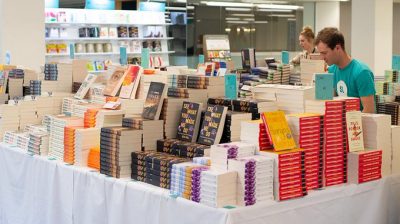 The State Library of Queensland (SLQ) bookshop recorded a 5.9 percent growth in sales at the Brisbane Writers Festival (BWF) bookstore from the previous year, thanks to ‘the strong six-day program and change in festival shop location’, said State Librarian and CEO Vicki McDonald.

‘Nonfiction titles made up 50 percent of this year’s top 20 bestsellers, with Speaking Up by Gillian Triggs and Accidental Feminists by Jane Caro among the top five,’ said McDonald. ‘And female authors were particularly popular with readers again, making up 65 percent of the 2019 bestseller list and every spot in the top five.’

The top ten bestselling books at the festival bookstore were:

‘We are thrilled to have presented our 57th Brisbane Writers Festival, with over 150 authors in attendance bringing the big and important conversations to Brisbane readers,’ said Pollock. ‘Our theme this year, This Way Humanity, showcased a diverse and inspiring mix of talent and opinions with panels, conversations and workshops running from Friday through to Sunday.’