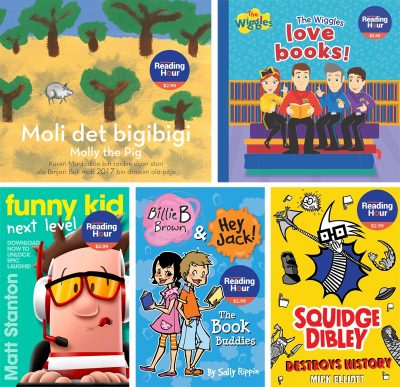 More than 4300 people have pledged to read this year, compared to the 2324 readers who participated last year, and more than 60 authors will participate in this year’s event. Last year’s campaign included 112 events, including 37 author events.

Hachette CEO and ARH chair Louise Sherwin-Stark said there are ‘potentially hundreds more that we do not know about yet in schools, libraries and bookshops around the country’. ‘We’ve been working earlier this year to lock in events, and to have 240 events confirmed at this stage is amazing,’ said Sherwin-Stark.

Sherwin-Stark said it wasn’t too late for bookshops and other organisations to register events. ‘One of my favourite events last year was organised by Dymocks Adelaide,’ said Sherwin-Stark. ‘A large comfortable armchair was set up in store with staff and local authors invited to sit and read for an hour. This created a really great event in store and was fun to follow on social media.’

Some of the major events to be held for ARH include Noni Hazlehurst reading from the new Leigh Hobbs book at Story Box Library, literacy charity Story Dogs and Matt Stanton at the Sydney Opera House and Mick Elliott and Oliver Phommavanh in the Ultimate Storytelling Battle at Floriade festival in Canberra.

The ARH will also giveaway 2000 books on Brisbane buses, including books by the author ambassadors as well as titles by other popular Australian authors. ‘Our partnership with Queensland Translink has enabled the Australian Reading Hour to connect directly with commuters,’ said Sherwin-Stark, adding that Translink staff will be handing out the books from 7 am at the King George Square Bus Station.

To make a pledge to read or to register an event, visit the ARH website here.