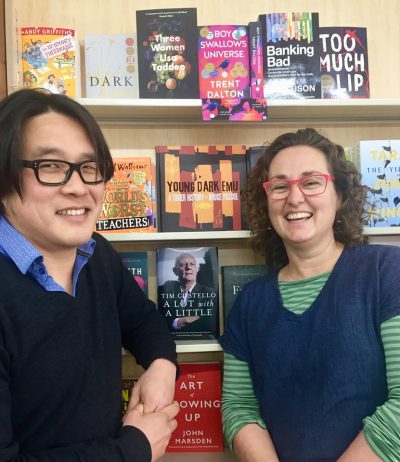 Booksellers, publishers and other industry organisations across Australia are participating in the global climate strike, taking place on Friday, 20 September. With almost 100 locations across Australia registered to strike, the global event is taking place in 120 countries across the world. At the time of writing, over 1700 Australian businesses have committed to the Not Business As Usual movement.

Family-owned bookshop Candelo Books, based in the NSW town of Bega, was one of the first Australian bookshops to commit to the strike. Co-owner Marianna Ypma told Books+Publishing the region suffered as a result of the Tathra bushfires, which destroyed almost 70 homes in March 2018, as well as another fire (the ‘Yankees Gap’ fire) in August last year. As a result, Ypma said, ‘We are acutely aware of what it might feel like living under rising temperatures and changed climate conditions.’

‘There really is no greater issue at the moment than climate change, and lost sales pale in significance against the threat global warming poses to our future,’ said Ypma. ‘What will the future of bookselling and publishing be in a world living under the impact of climate change anyway? Whilst it would seem easier to just keep doing what we are doing and ignoring the issue, hoping it will go away, we believe it is too late for that now … We hope our willingness to sacrifice sales will serve to illustrate how seriously concerned we are about this issue. We hope other businesses will join the strike, putting the future first.’ Ypma added, ‘Candelo Books has never closed its doors on a whim … We are a small store in a small town and we need every sale we can get, but this issue is too big to ignore.’

Sydney-based publishers and booksellers including Gleebooks, Pantera Press, Murdoch Books, NewSouth and Giramondo have also committed to the strike. Giramondo publicist Lea Antigny said the publisher’s editorial and publicity staff will leave work on Friday in solidarity with striking school students. ‘We do so while acknowledging that striking with company support is unusual—strikes have always been a crucial expression of collective power and neither students nor workers need permission,’ Antigny said. ‘A day’s strike is a small action in the face of the climate crisis we are facing. Giramondo Publishing acknowledges the right of workers and students to strike in protest of governmental inaction on climate policy across the country.’

Staff at Allen & Unwin’s Sydney office will join colleagues in Melbourne and Auckland in leaving work on Friday. Allen & Unwin CEO Robert Gorman said: ‘Allen & Unwin is very supportive of the global climate strike and all our staff have been encouraged to participate with flexible working arrangements this Friday.’

The Melbourne strike is expected to be the biggest in Australia, in part because the strike coincides with the last day of the Victorian public school term.

Melbourne-based distributor Books at Manic and retailers including Readings, Brunswick Bound, the Sun Bookshop and the Younger Sun, the Little Bookroom and Neighbourhood Books have all committed to closing their doors to attend strikes.

Readings managing director Mark Rubbo said he was spurred to action by reading a recent cli-fi novel. ‘I was reading The Glad Shout by Alice Robinson (Affirm), a novel about climate change, and I was so moved that I thought Readings should help pressure the government to take a more proactive stand on tackling climate change,’ said Rubbo. Readings staff are entitled to a day’s paid leave to volunteer for charity so staff can use part of this allocation to attend the strike.

Kyneton-based children’s specialist Squishy Minnie Bookstore will shut from noon onwards, writing in a Facebook post: ‘Closing our business on the busiest day of our week was actually not an easy decision. As with all independent bookstores money is tight, so losing half a day is actually a big deal. But, it is not as big of a deal as everything else we will lose if politicians, governments, corporations and each and every single one of us does not start acting immediately.’

Melbourne-based publishers including Affirm, Black Inc., Scribe, Text and Hardie Grant have also committed to the strike or are allowing staff to take leave to attend.

Affirm will close its office between 2 pm and 4 pm, with ‘most’ of the staff attending the Melbourne strike. Publishing director Martin Hughes said, ‘We are very happy to formally sign up to the pledge for this international day of climate change action and contribute to what we hope will become unstoppable momentum for change, propelled by businesses and people pulling together.’

Black Inc. general manager Elisabeth Young said the publisher would facilitate flexible working arrangements for staff to attend. ‘Black Inc. as a company is passionate about action on climate change and it is an issue that is very important to our staff, so we are pleased to be able to support staff to take a stand. We are energised by the ways that school children and young people are demanding action be taken and want to support the many people who are already working so hard to advocate for action on climate change.’

Text Publishing staff have ‘the full support of the company if they choose to participate in Friday’s school strike for climate’, according to the publisher. ‘It’s never been more important for businesses to support this vital cause.’

Writing WA will close its doors to participate in the strike on Friday, which CEO Sharon Flindell said is ‘no small thing, but nevertheless something we feel compelled to do’. Findell added, ‘It seems fundamental we stand together with our colleagues in the cultural sector, with students and with others in the community, to insist that climate change is real and that immediate action is needed to safeguard a future for us all.’

Nathalie Latter and Sam Baker, owners of Rabble Books and Games in Perth, are closing their shop for the strike, driven by a deep appreciation of ‘how desperately we need to change our social, economic and political systems to try to deal with climate change’.

‘I used to be one of the young people pushing for climate action,’ said Latter. ‘And now I am a middle-aged person pushing for climate action in a climate emergency. But it is the young people of today who have managed to build an amazing movement, born of Greta Thunberg’s inspiring school strikes. It is a movement built by people who don’t even vote yet, in a world where we can’t trust our electoral system to generate the kind of change that we need. The strikes are game changing and fill me with hope.’

‘We might lose customers,’ said Latter. ‘We will definitely lose money on the day. But we will also help make history.’

Children’s specialists Paper Bird Books have also pledged to close their doors on Friday in support of the strike.

In Adelaide, Wakefield Press will be closing its doors from noon to 2.30 pm to allow staff to take part if they want to. Director Michael Bollen said: ‘I support all our staff to take part in the strike, along with more than 800 businesses around Australia. Let’s hope the prime minister takes notice.’