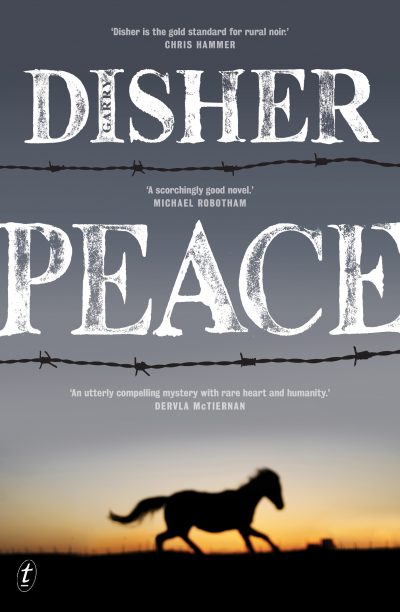 In Peace, Garry Disher returns to the rural South Australian town of Tiverton and to the hero of his 2013 novel Bitter Wash Road, Constable Paul ‘Hirsch’ Hirschhausen. Hirsch has been exiled to the one-man police station after accusations of whistleblowing on members of his department in Adelaide, his own reputation tainted by their corruption. A tough, smart, honest cop—one of the most likable lawmen in crime fiction—most of Hirsch’s days are spent doing welfare checks and attending to small, nuisance offenses and the occasional drug overdose as the ice epidemic runs its horrific course. Keeping the peace, in other words. Then, over Christmas, the unthinkable happens: a brutal, bloody incident involving the massacre of Nan Washburn’s horses, and an equally violent incident involving a stand-offish family living outside of town that brings the metropolitan police into Hirsch’s territory. The cast of Peace is strong and the local colour is as vivid as ever. Disher was portraying the harshness of the Australian landscape long before Jane Harper’s The Dry ignited a new wave of Australian crime fiction, and fans of her work, and Chris Hammer’s Scrublands, will find much to enjoy here. Disher provides the complete mystery package: unobtrusively slick detection, plenty of surprises and mounting thrills, with a protagonist that demonstrates a remarkable level of humanity.