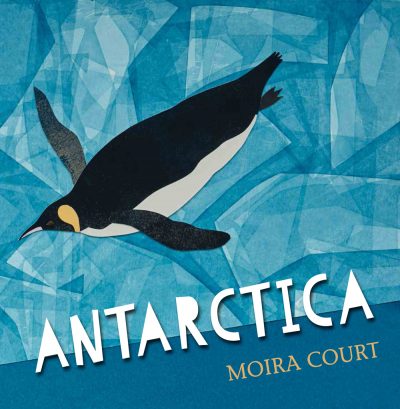 This picture book by artist and author Moira Court has a distinctive visual style that makes it stand out from other books for readers aged three to five. Exploring the fascinating creatures that can be found in one of the harshest environments on earth, from tiny krill to giant whales, each double-page spread features stunning collage, block print and woodcut artworks. Repeating shapes create a representative landscape background upon which the arctic creatures appear. How many animals can we find? In a counting and rhyming combination akin to the classic One Woolly Wombat, Antarctica counts us from ‘one freckled leopard seal’ up to ‘ten crimson, vermilion sea stars’. There is plenty of satisfying alliteration and rhyme, which makes for enjoyable repetition when reading aloud. The final pages of the book feature a ‘Did you know’ section, with one spread dedicated to facts about Antarctica and another to facts about the creatures featured in the book. This offers a great opportunity for extended conversations with older readers to learn more about the animals that have particularly captured their imaginations.