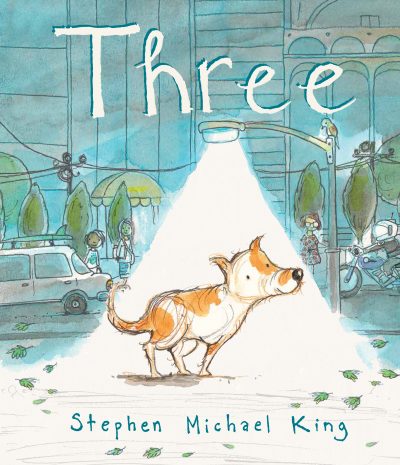 Stephen Michael King is an accomplished picture book writer and illustrator, with award-winning books such as Rainbow Bear, Mutt Dog! and Leaf just a selection of his publications. This book tells the story of Three, a homeless three-legged dog. His days are just a ‘skip and a hop’ as he walks about the city finding warmth and food. The soft watercolour illustrations make Three just such a friendly character. There is little conflict in the story—aside from not having a permanent home, nothing much bothers Three, but he finds a loving family who adopt him. Three has a clear message of accepting difference and disability—his life is just how it is with three legs: ‘Three was thankful his legs took him wherever he chose.’ After being adopted by his new farm-dwelling family, Three’s life becomes fun, filled with cardboard castles and pancakes on Sundays. The spreads become brighter with the lush greens of the farm, and the book is filled with humour as Three categorises other beings based on how many legs they have: ‘If Three had four legs he might be a chair. Chairs didn’t go anywhere, and the two legs put their bottoms on them.’ With its simple messages of acceptance, gratitude and belonging, Three is a striking picture book that will suit children aged three and up.

Clare Millar is a bookseller, writer and editor