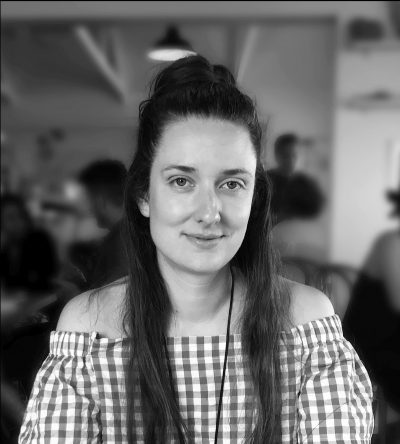 Jessica Horrocks, designer and production coordinator at Text Publishing, was recently named Emerging Designer of the Year at the 2019 Australian Book Design Awards. She shares her career journey.

Having teachers as parents, I was fortunate to grow up surrounded by books. I loved drawing and have strong memories of trying to perfectly replicate my favourite illustrations and typography, and even stronger memories of the resultant frustration when I couldn’t. I never compromised my integrity by resorting to tracing though—freehanders were considered artistic geniuses whereas tracers were strictly hacks (in middle-grade circles of the late 90s, at least).

After high school I started a fine art degree at Curtin University of Technology but after the first semester doubted whether it was the right path for me, so I transferred to design the following year. It was daunting: I’d never even opened an Adobe program before. The art school was very separate from the design one too, both geographically and ideologically. I remember one of the art tutors saying about design: ‘They’ll just teach you how to draw a straight line.’ And one of the design tutors, about art: ‘I just don’t understand why they always have to be so messy.’ It was an amusing introduction to the division between the two worlds, one I wasn’t really aware of at the time.

Even though I majored in illustration, by the time I graduated I knew I didn’t want to be a professional illustrator. It seemed to be about developing a signature style and sticking with it, whereas I wanted the opportunity to continue experimenting and working in a wide variety of styles.

Within a couple of years of graduating I moved to Melbourne and worked as a Mac operator at the educational publisher Pearson. I was warned in the interview: this is not a creative role. But I didn’t mind, I was just excited to be working in publishing. I wanted to learn about the technical side of book production, and during my time at Pearson I certainly did.

I knew I wanted a more creative role eventually, though. At that point my folio was largely illustration-based, the only recent work being the odd gig poster I’d made for friends. With a folio in dire need of new projects and subpar typography skills in need of guidance and refinement, I completed Shillington College’s masterclass. It was held on Saturdays and most of my free time was spent on projects, but it didn’t bother me at all—they were dream briefs.

Not too long after completing the course, in early 2015, an assistant role was advertised in Text Publishing’s production and design department. I thought the role suited me perfectly: it was a mix of the production work I already did and the design work I wanted to do. I got the job and was thrilled to design an ad in my first week and see it in print the next.

In early 2016 I started getting my own cover projects. My first was White Sands by Geoff Dyer and I learnt an important lesson: don’t overcomplicate a simple brief. My second was The Scholl Case by Anja Reich-Osang and I learnt another important lesson: don’t add embellishments if they detract from the design. There have been many lessons since, but I won’t list them all here.

I’m lucky to be mentored by talented book designers like W H Chong and Imogen Stubbs—thanks to their guidance over the past few years I think my work has improved and will hopefully continue to do so. I recently won ABDA’s Emerging Designer of the Year award, which is an achievement not only for me but also for them, and everyone else I’ve worked alongside.