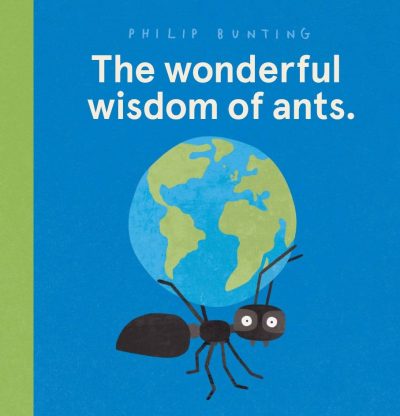 Ants. What exactly do these tiny, easily overlooked creatures have to teach us? Quite a bit, according to Philip Bunting, whose picture book is funny and informative as he goes about telling us some factoids about these animals who are otherwise barely considered by the human population. According to the book there are roughly 10 quadrillion ants in the world, and to clarify this preposterous number Bunting draws individual ants holding up zeros (there are many, many zeros). He also lists some of their favourite and not so favourite things. The former category includes: family, micronaps and ‘being caught on camera carrying stuff way bigger than they are’. The latter category? Boots, magnifying glasses and anteaters (obviously). Bunting explains their sense of community, how they go about setting up a colony, the types of ants in a colony (readers will find out that all the females have the power in this set-up), as well as how they communicate through smells and not sounds, among other things. Bunting uses humour to good effect as he shows us how ants can teach us to be better people (‘Reuse or recycle everything. Waste nothing’). Best for primary schoolers, The Wonderful Wisdom of Ants is full of educational snippets and teaches almost by stealth.