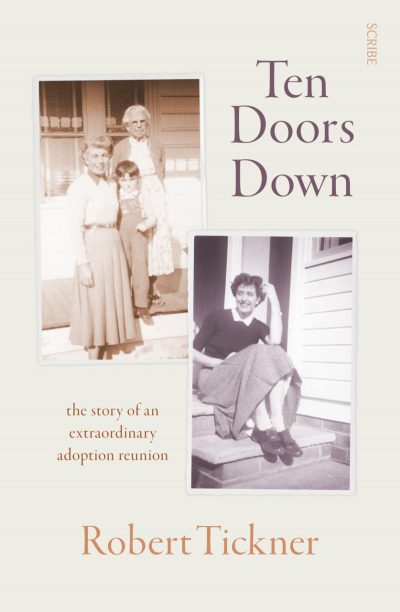 Ten Doors Down: The story of an extraordinary adoption reunion (Robert Tickner, Scribe)

As the rolling apologies for forced adoptions swept Australia in 2012 and 2013, it was too late for Robert Tickner’s mother—she had died, taking her secrets to the grave. But 20 years before, Tickner, Minister for Aboriginal and Torres Strait Islander Affairs in the Hawke and Keating governments, while calling for an inquiry into the Stolen Generations, underwent his own most transformative personal experience—meeting his birth mother. Doting adoptive parents who told him he was ‘chosen’, and a dream run through university and into politics meant that it wasn’t until he was 41, having fathered his own child, that he decided to trace his birth mother. That this meeting turned out to be life-enriching beyond all expectations is an example of Tickner’s great fortune, and in many ways it’s the privilege and luck of his personal situation that makes this book such an interesting read. Tickner’s sensitive portrayal of the woman at the heart of his story is a powerful refutation of an inhuman system that doomed generations of single mothers (described as ‘of low intelligence if not actually retarded’ by doctors) and their children (the so-called ‘clean slates’) to the unimaginable misery of forced adoptions. Hundreds and thousands of families were touched by these policies. This moving memoir tells the exceptional story of one of them.

Julia Taylor worked in trade publishing for many years