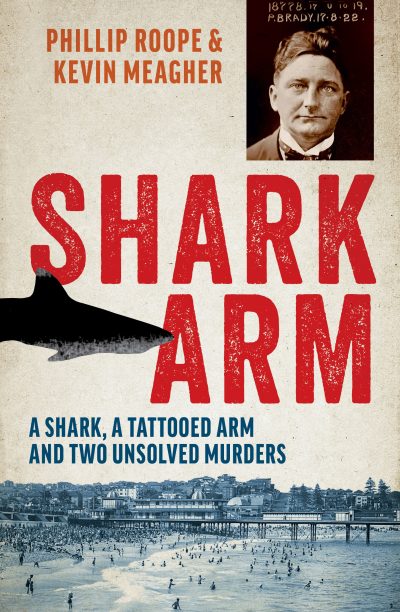 Shark Arm is an offbeat true crime book that begins with a shark throwing up a man’s tattooed arm in front of onlookers at a Coogee aquarium in 1935. The spectacle is the entry point into the circumstances surrounding the disappearance (and presumed death) of former boxer and possible police informant Jim Smith, and the subsequent murder of a key police witness. Phillip Roope and Kevin Meagher take the reader through the events leading up to, and following, the arm’s discovery, including a Coen brothers-esque attempt to commit maritime fraud, and escalating violence amid a seamy world of dock workers, gamblers, petty grifters and other men trying to eke out a living on the wrong side of the law. Under immense public pressure due to the media’s fascination with the shark arm, police and prosecutors botch both murder cases, with Roope and Meagher recreating the court and coroners’ hearings in painstaking detail before making their own convincing case as to the true identity of the murderers. While it’s a thorough approach, at times the pace of the book slows as the hearings recount events already covered. Despite the gruesome discovery that serves as the catalyst, there’s nothing that feels particularly significant about the murders in a historical sense. Shark Arm is a fun book that will make good summer reading for fans of Australiana, light history and true crime.