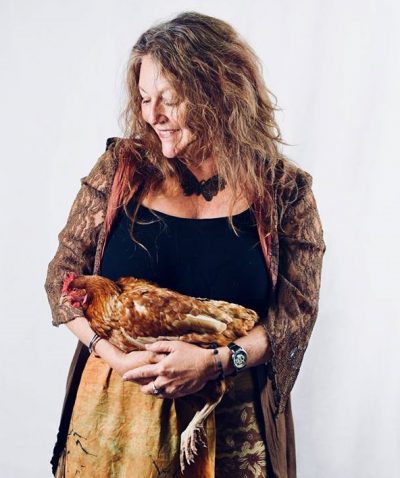 Among the animals: Donna Mazza on ‘Fauna’

Donna Mazza’s novel Fauna (A&U, February) is set in a near-future in which a woman is enticed into an experimental program that mixes her embryo with genetically edited cells. Reviewer Anne Barnetson says the novel ‘skilfully fuses the real concerns of parenting in the age of catastrophic climate change with a dystopian plot’. She spoke to the author.

In the book, it’s touched on that the world is ailing due to climate change. Do you think Stacey’s family choose to have their experimental child, Asta, in order to save humanity or is it more for love?

Stacey and her husband choose to have Asta to give their dire situation a financial boost, and because Stacey is lured by the prospect of the experiment and has some history that connects her to it. It soon becomes clear that she loves the baby deeply and this is her prime motivator for what happens after the decision to have her is made. Love is central to the novel, and the complexity of it within the family is a major theme. Asta’s role is in medical research and treatment but she might also be read as insurance against the uncertain future humanity has due to climate change. Her physical strength and robust genes seem to be just what the doctor ordered to ensure a strong human future.

Would Stacey’s fierce protectiveness be less intense had Asta not been so visibly different?

I think Stacey is so protective because she knows she only has Asta in her care until she grows up. That threat remains with her and becomes more ominous as her love deepens for the child and it becomes clearer what the consequences will be for the family. Stacey becomes very paranoid about being outed publicly and I think it’s clear she wouldn’t cope with that very well. Asta’s appearance fuels the paranoia but other characters in the novel aren’t as surprised by her as Stacey thinks they will be.

I liked recognising parts of WA in Fauna. Is landscape just as important as the human characters in your writing?

In our times, the idea that landscape is as valuable as the human might be gaining a little traction (at last) when we contemplate what ‘post-nature’ means for us. The human and non-human characters are my focus but a sense of place in the story is as important. Stacey and Asta’s relationships with the environment are integral to their identities. I don’t think you can pull them apart. The waterways, the trees and the birds give them a sense of connection and soothe them when things are at their most painful. The specific, endemic detail of this in the novel is really important to me in honour of the place where it is set, a place I know very well because I grew up here and have lived nearby much of my life. It’s so beautiful; I couldn’t make up a better place.

Is it a huge change from poetry to write novels, or is your process much the same?

I published my first novel, The Albanian (Fremantle Press), in 2007 and I have been working on short stories for a few years now, as well as poetry. Fauna began its life as a story called ‘The Exhibit’, published in Westerly in 2015, and was joint winner of their Patricia Hackett Prize for that year. Writing poetry actually helped me a lot in writing this novel. Some days I would go walking by the estuary or rivers nearby and write a poem about the landscape, which naturally unravelled and expanded into passages of the novel. I think that’s why some of it is very lyrical. I find poetry a great un-blocker for my imagination and it allows me to succinctly capture the metaphoric, which is important to my prose. Poetry is a bit like painting en plein air and allows me to capture quick impressions and observations, take them back to my desk and draft them into prose.

I know from your Instagram that you have lots of animals, and so does the family in Fauna. Is it helpful to take a break from work and watch the chooks?

The lives of my chooks are a meditative idyll, punctuated by occasional food fights and upsets to the power dynamic. I have a trio of roosters who sing dawn harmonies, wild hens who eat all my lettuce and several heritage breeds all mixed together—I call them mixed nuts. Our dog, Louis, was the inspiration for the dog in the novel. While I was writing it, he was very supportive, slept beside my desk and walked with me around the landscapes that inspired the novel’s setting. He worked hard and deserves to be Insta-famous.

I read a lot and all kinds of things so it’s difficult to pick something from the heap. I’ve revisited Daphne Du Maurier’s novels lately for some harmless escapism and I’ve recently finished The Handmaid’s Tale, which I read years ago for the first time. It’s amazing and resonates with our times really well. I read an advance copy of Charlotte Wood’s new novel The Weekend (A&U) and loved that too. She gives such beautiful and authentic insights into the lives of older women. It’s so bittersweet and has a fabulous dog in it who, to me, holds the novel together.

I’m currently immersed in Amanda Curtin’s beautiful biography Kathleen O’Connor of Paris, published last year by Fremantle Press. She has a very delicate and empathic style and captures a sense of place and its connection to the historic characters so well. She’s a great researcher and feels so trustworthy and generous as an author.

Books in the media this weekend, 27–28 November  Daily Newsletter Feature