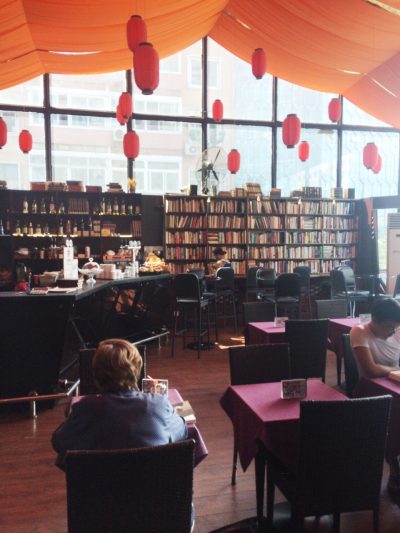 The Bookworm Beijing to close amid cleanup of ‘illegal structures’

Beijing’s English-language bookstore The Bookworm is due to close on 11 November, before its building is demolished by the city government, with the owners hoping to open in a new location.

The bookstore said in a statement, ‘Despite our best efforts, we appear to have fallen prey to the ongoing cleanup of “illegal structures”, and we have not been able to secure an extension of our lease.’ In 2017 the Beijing government began demolishing buildings in the Sanlitun bar street that built extensions, rooftops or basements without obtaining permits.

Founder Alexandra Pearson opened the The Bookworm as a library in the courtyard of the Sanlitun area in 2002; it became a bookstore, bar and cafe after moving to its current location in 2005. Bookseller Peter Goff also opened branches of the bookstore in the cities of Chengdu and Suzhou, which closed over the past two years due to low sales.

The owners said the closure of the Beijing store is ‘disappointing’ because it ‘remains a thriving business with stronger, more diverse links to the wider Beijing community than ever before’.

‘While we attempt to reorganise and find a new location, we wish to say what an honour and a pleasure it has been to have played a small part in fostering cultural exchange, promoting literature and an appreciation of the arts during an incredibly exciting era in Beijing, and indeed for China as a whole.’

The bookstore has hosted the annual Bookworm International Literary Festival since 2006 and also hosted events such as the EU Literary Festival and Australian Writers’ Week. It also launched a literary award and publishing house, as well as the literary journal MaLa featuring translated Chinese works and original English writing by foreign residents of China.