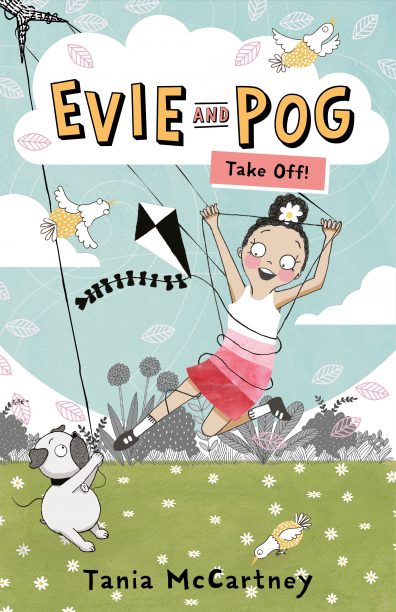 Six-year-old Evie and her best friend Pog the pug live in a treehouse next to obsessively tidy Granny Gladys’ house. Evie is accident-prone, wildly enthusiastic about the world, and enjoys doing doggish things (she licks Pog’s face when she’s happy), while Pog is a little more earnest and quite human in his tastes. Their adventures are extremely energetic (occasionally overwhelmingly so—there’s no shortage of exclamation marks!) and full of slapstick disasters and friendly resolutions. Evie is warm, odd and likeable, and though the other characters are a little less substantial, it’s not too much of an issue in a book at this level. The tone is quite zany and extremely imaginative while still being grounded in a familiar, safe, age-appropriate world where baking cupcakes and performing a school play provide plenty of excitement. Tania McCartney’s cheerful illustrations form a large part of the book, making it a good stepping stone between picture books and longer chapter books. Similarly, the text is well spaced and often incorporates animated angles and font changes. The first in the new ‘Evie and Pog’ series, this quirky collection of three tales (broken into shorter bite-sized chapters) will appeal to beginner readers with a good sense of humour, aged six and up.

Anica Boulanger-Mashberg is an editor, writer and bookseller at The Hobart Bookshop