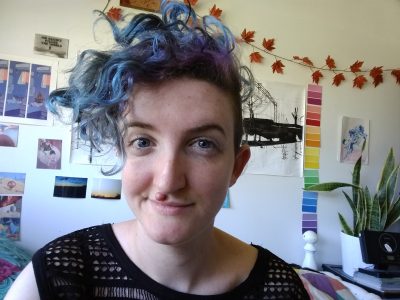 Reviewer Jordi Kerr says Alison Evans’ YA novel Euphoria Kids (Echo, February) is ‘a tender, contemporary fairytale about magic, friendship and gender identity’ that follows three trans kids ‘learning to step into their own power’. They spoke to the author.

What is gender euphoria, and what motivated you to write about it?

Gender euphoria is a celebration of who you are, a feeling that you are revelling in your gender—it feels right. It feels good. And it’s not for anyone else. People are more aware of the concept of gender dysphoria—the idea that someone’s inner sense of self does not ‘match’ their body—and the distress caused by this. I was aware of the concept of gender dysphoria for a long time before I was aware of the term gender euphoria. There are a lot of stories written about trans people, and a lot of them are written by cis people, for a cis audience. Many of them explore the struggles of how hard it is to be trans and accepted.

For me, writing about gender euphoria comes from a place of wanting to write about trans characters for a trans audience. We don’t need to make cis people comfortable. I want to write about it because trans kids should know about gender euphoria. If they learn about gender euphoria before gender dysphoria—even better. This book is basically three trans kids being loved for who they are, loving themselves and loving each other. With the growing number of trans characters written by trans authors, I think we can start to see a shift from the narrative of ‘I was born in the wrong body’ to ‘I was born in my body and I’m going to change it the ways I want; it’s always been my body’.

The book is told from both Iris’ and Babs’ perspectives. What made you choose a dual-perspective approach, and why these two characters in particular?

I initially wrote the book solely from Iris’ perspective, with Babs and the boy both being supporting characters. Babs has been cursed by a witch, and a lot of the book centres on her trying to find this witch. Halfway through writing the book I had the thought, Babs should be the main character. I’ve written it the wrong way. But then I realised how much work it would be to rewrite it all, and how much I loved Iris, and I powered through and finished the draft.

When my editor, Kate, read through it, we met up and she told me what I didn’t want to hear: that Babs should be a narrator. Immediately in my mind I pictured throwing the whole book out and starting again. But then Kate said she thought I should keep Iris’ narration too. Iris’ gentle story of wanting to learn magic, of wanting friends, was something I didn’t want to give up.

Are there any classic fairytales that have really spoken to you, as a reader or a writer?

I have always loved the ideas of fairytales: the aesthetics, the language, the mood of them all. When I think about them, a single tale doesn’t come to mind, but rather more modern stories, like Fairytales for Wilde Girls by Allyse Near and the Weetzie Bat books by Francesca Lia Block. I also think of movies like My Neighbour Totoro and Hunt for the Wilderpeople, or the music of Florence + the Machine and Purity Ring.

The setting in Euphoria Kids is a character in its own right. What draws you to write about the Australian bush?

The house I grew up in was on a 12-acre plot of bush on Wurundjeri land, in Emerald in the Dandenong Ranges. I spent the first 12 years of my life living in Emerald, surrounded by huge eucalypts. I spent so much of my time outside in the plants, mostly unsupervised, either by myself or with my brother. We would run around making up stories and pretending we were on adventures, we would collect firewood, we would go for walks. While the book I’m working on right now isn’t set in the Australian bush, I know I will write about it again. I can’t stay away. I’m obsessed with the Dandenongs, with how much they hold, how they’re so full of life. When I go out east, I’m home.

There is so much magic in Euphoria Kids! If you could have one magic power, what would it be?

I don’t know how I would choose just one! I am fascinated by sigils though, which is why I placed such a strong magic in them in the book. I love the idea of drawing a shape and then having it be able to do something. I would love to be able to do something like that—to transport myself somewhere else by drawing a sigil on my leg, to protect my loved ones by tracing a symbol on my chest. I had the best time writing the scene where Iris gets the sigils traced into their skin!

The Surprising Power of a Good Dumpling by Wai Chim (A&U). I don’t know where to begin with how much I loved this book. The main character, Anna, takes on too much, she tries to look after everyone and puts their needs before her own. I wish I could hug her.