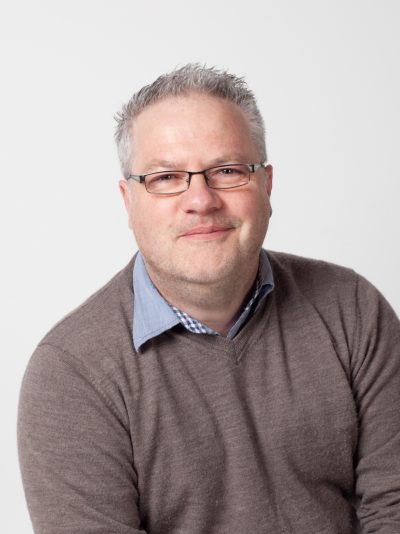 Gavin Burbidge is an account manager at Penguin Random House Australia and a constant figure on the ABA’s shortlists for Victorian rep of the year. He shares his career journey.

It was probably inevitable that I’d end up working with books; after all, my parents met in a bookshop and the family home resembles a well-stocked library. I’ve been at Penguin—now Penguin Random House—for almost 16 years, but I had to wade through a few other jobs to get here. I read history, archaeology and sociology at university. I’ve been a garbo, painted and decorated, driven tractors, worked as a storeman, trained as a violin maker and had a brief stint as a white van man in France.

A friend worked at the Technical Book & Magazine Company and when he made a final push towards journalism, I took his place in the automotive department. Within a few years I was their general manager and buyer. Tech Books was a Melbourne institution, with an eclectic clientele and an overqualified staff. It was one of the few bookshops where most of the booksellers weren’t writing fiction. After a somewhat successful book signing with BBC motorsport commentator and journalist Murray Walker—when over 1000 people blocked Swanston Street for several hours—a publisher representative job beckoned at Penguin.

Penguin had recently moved from the fabled Ringwood site to Camberwell, and UBD had opened in Scoresby. The publisher rep role had also moved into the digital age. Gone were the apothecary bags and folios of jackets; sell-ins were now on computers! There were 13 Melbourne-based Penguin reps. The airport was two days of hands-on work for two people every week (placing orders and re-stocking all seven airport bookshops), while the mass-market shelves were the site of publisher turf-warfare. Then, as now, the publisher’s rep is the face of the publisher, an intermediary and a champion of the bookshop. Reps also inevitably take on the additional supporting roles of reader, reviewer, promoter and general all-rounder.

At a rough estimate, I’ve shown over 75,000 books to bookshop owners and their buyers in my career so far. Sales is a balancing act: enough interest to warrant the print-run, to highlight a book’s importance, to have shelf-presence, and stock to last until another order arrives if the publicity bites. Not all books are for all bookshops. Sales is also a monthly curation: getting the right proof or finished copy in the right hand is key because most bestsellers are created by passionate readers and by hand-selling. Not all books succeed. Indeed, some fail terribly, but others endure and are there for the long haul, or they gain ascendance with the release of the film that will cement their fame.

Anyway, I must be doing something right. I’m fortunate to have been a regular on the nomination lists for the Victorian ABA rep of the year award; I have been runner-up, shortlisted—and even won a few times! Penguin has also recognised my contribution to the industry with awards for innovation and sales.

Penguin’s move to Collins Street in 2012—and the Penguin Random House merger that followed in 2013—rightly refocused efforts on selling to trade bookshops, the ‘engine room’ of bookselling. My role expanded accordingly, with sales directed from a head office level, and new clients like the VCE/HSC text selection panels.

Most, if not all, at PRH have an insatiable appetite for reading and a true passion for their work. It is exciting to read the first novels of authors like Meg Rosoff, or an early draft of one of Rick Riordan’s new Percy Jackson novels, and watch them morph into millions of sales. This passion for books and reading is fostered by an irresistible community of booksellers and customers.

I recently met Craig Challen and Richard Harris (thoroughly nice chaps), whose incredible book on the Thai cave rescue, Against All Odds (Viking), is published in November. As newcomers, their impressions of bookshops and the industry are revealing. They recognised instantly how people working in the book industry talk about their work in terms of books and reading, not sales or ‘work’—the focus is on the magnificence of the books themselves. And who am I to disagree?