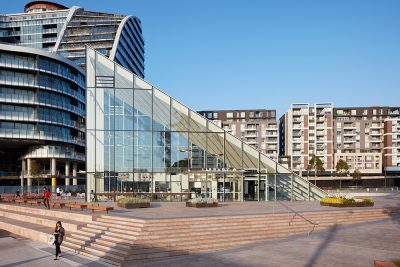 The architects who designed the Green Square Library and Plaza in the Sydney suburb of Zetland won two awards at the Australian Institute of Architects national awards on 7 November, reports ArchitectureAU.

Studio Hollenstein with Stewart Architecture won the Sir Zelman Cowen Award for Public Architecture as well as the National Award for Urban Design for the Green Square Library and Plaza, cited as a new ‘living heart’ for the rapidly developing Green Square district.

Award judges said Green Square Library had been recognised ‘as a standout for its key design move: to locate the bulk of the library program underground in anticipation of a tall and dense urban future all around it’.

‘The built outcome is testament to the generosity of this strategy,’ the judges added. ‘It opens up a major portion of the site as accessible public space and ensures that sunlight will reach future south-side retail and hospitality venues, undoubtedly enhancing their viability and the vibrancy of the place as a whole.’