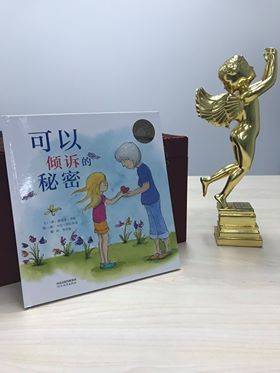 In China, a translated edition of Naomi Hunter’s A Secret Safe to Tell (illus by Karen Erasmus, Empowering Resources) has won the gold award at the Children’s Choice Book Awards.

Translated into simplified Chinese by Li Jianmin and published by Hebei Education Publishing House as Kěyǐ Qīngsù de Mìmì, A Secret Safe to Tell encourages meaningful conversations about body safety, the importance of not keeping secrets and confiding in trusted adults if something is making you uncomfortable.

Empowering Resources co-founder Jeremy Hunter said, ‘When it was first released in Australia in 2014, it made a huge impact on kids in Australia. Within the first three months of release, 10 young girls disclosed abuse while reading it.’

Chinese children cast 1.3 million votes for their favourite book in categories that included picture book, younger readers and children’s nonfiction, after librarians in 39 cities visited 312 schools across the country.