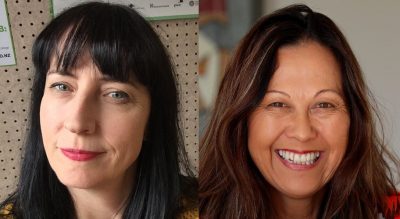 King was awarded for her achievement in securing the release of Behrouz Boochani from Manus Island detention centre and bringing him to New Zealand. ‘Rachael King’s tenacity in bringing Behrouz Boochani to our shores, thanks to support from Amnesty International, resulted in a major human rights coup, enabling his freedom from detention, an action that sits well with our affiliation to PEN International, who work to defend freedom of expression and fight against the incarceration of writers worldwide,’ said NZSA president Mandy Hager.

Murray was awarded for her work as an writer and long association with the New Zealand literary scene. ‘Writing in the science fiction, fantasy and horror genres, Lee Murray is the only New Zealander to twice be nominated for the international Bram Stoker Award, as well as winning 12 Sir Julius Vogel Awards and two Australian Shadow Awards,’ said Hager. ‘She has worked tirelessly to support young writers and, most recently, helped establish a new residency for local speculative writers.’