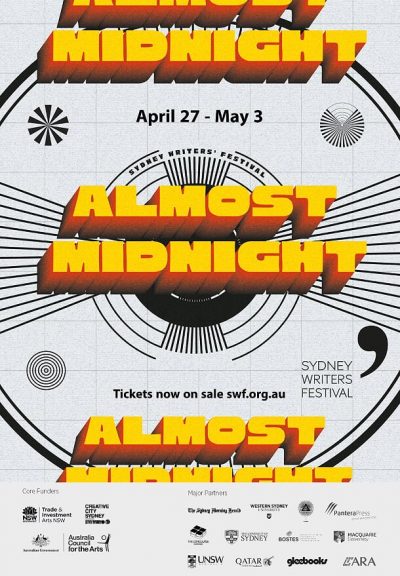 The program has been announced for the 2020 Sydney Writers’ Festival (SWF), which runs from 27 April to 3 May.

Over 400 local and international writers, journalists and public figures will take part in events held at venues across Greater Sydney including Carriageworks, the Seymour Centre and Sydney Town Hall.

British Booker Prize-winner Bernardine Evaristo and Gomeroi poet and author Alison Whittaker will each deliver an opening night address on the festival’s theme, ‘Almost Midnight’, drawn from the metaphor of the Doomsday Clock and its current position of 100 seconds to global catastrophe—the closest to ‘midnight’ it has ever been.

The family program will be held at City Recital Hall and Riverside Theatres in Parramatta on Saturday, 2 May and at Carriageworks and the Seymour Centre on Sunday, 3 May. The Saturday program will be headlined by author of the Dog Man series Dav Pilkey and his ‘Do Good Tour’, while the Sunday program features US graphic novelist Raina Telgemeier and local authors Adam Briggs, Beci Orpin, and ‘Real Pigeons’ creators Andrew McDonald and Ben Wood.

‘All Day YA’, the festival’s full-day program dedicated to young adult fiction, will be held at Carriageworks on Saturday, 2 May, featuring international guests Leigh Bardugo and Alice Oseman alongside debut #LoveOzYA authors Alex Dyson, Lisa Fuller and Kay Kerr.

The festival’s Live & Local program will stream events in real time to regional and national audiences across Australia, while a number of international guests, including Siri Hustvedt, Bernardine Evaristo, Leslie Jamison, Colum McCann and Lisa Taddeo, will participate in interstate events post-SWF.

SWF artistic director Michaela McGuire said: ‘At the beginning of every year, the Bulletin of Atomic Scientists consider humanity’s chances of wiping itself out, using the metaphor of a Doomsday Clock striking midnight … In January this year, the clock lurched closer to the symbolic apocalypse than ever before: just 100 seconds to catastrophe. This year’s program celebrates the writers and thinkers who are writing and fighting to reverse the clock’s movement.’

The program announcement comes as a number of literary events have been cancelled in response to the coronavirus pandemic. SWF organisers issued a statement yesterday saying they are ‘cautiously proceeding’  with the festival, pending ‘worldwide updates as well as the advice of the Australian Government, New South Wales Government, the Chief Medical Officer and World Health Organisation’.

To see the full SWF program, visit the SWF website.