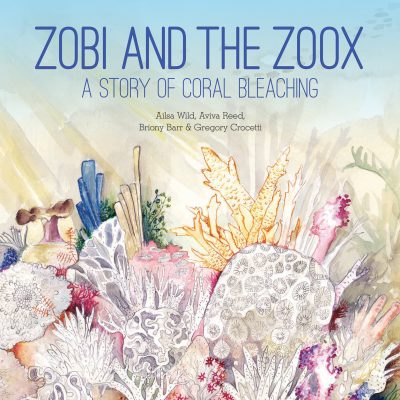 Language rights to four titles in the ‘Small Friends Books’ series of educational picture books—co-published by art–science collaborative and micro-publisher Scale Free Network (SFN) and CSIRO Publishing—have been sold to China and Korea. Korean-language rights to The Squid, the Vibrio & the Moon (with Linda Blackall), Zobi and the Zoox: A story of coral bleaching, Nema and the Xenos: A story of soil cycles (with S Patricia Stock) and the forthcoming The Forest in the Tree: How fungi shape the earth (August) were sold to Wonderbox (Bulkwang Media Co.) in South Korea, and Chinese-language rights were sold to Beijing Land of Wisdom Books, with sales brokered by UK-based Marco Rodino Agency. Both publishers plan to release the four titles as an omnibus in 2021. SFN’s Gregory Crocetti said: ‘This was exactly the sort of outcome we were hoping for from our first experience in Frankfurt—a pathway to bring our exploration of microbial worlds and these positive stories about the fundamental role of microbes (which are true no matter where you are in the world) to international audiences, and to counter some of the fear about this invisible realm—especially at this time.’

Hardie Grant Egmont has sold rights in five territories to Philip Bunting’s forthcoming picture book Your Planet Needs You! (May), a ‘highly original nonfiction guide to reducing household waste’ for a young audience. German-language rights were sold following a ‘significant’ pre-empt offer from Verlagsgruppe Random House, alongside sales to Korea, Spain, Portugal and Taiwan. Anette Weiß, acquiring editor at Random House Germany, said Bunting ‘succeeds in finding a child-oriented and positive approach to the topic of environmental protection with vivid examples and a lot of humour’.

Fremantle Press has sold complex Chinese-language rights in Taiwan and Hong Kong to the forthcoming picture book Littlelight (Kelly Canby, July) to Wordfield Publishing. The story of a town whose bricks start to go missing, Littlelight explores themes of tolerance and acceptance, and is illustrated in ‘moody black and white with dynamic neon highlights’.

Text Publishing has sold German-language rights to debut author Hugh Breakey’s forthcoming novel The Beautiful Fall (2021) in a six-figure deal to PRH Germany imprint Blanvalet. The Beautiful Fall—‘one of the most filmic romances to come across our desks,’ according to the publisher—follows the solitary and regimented life of Robbie, a man with recurring amnesia whose memory resets every 179 days. With just 12 days left before his next forgetting, he meets a woman called Julia.

Text Publishing has also sold North American and Dutch-language rights to Claire Christian’s forthcoming adult rom-com, It’s Been a Pleasure, Noni Blake (October), to Harlequin imprint Mira and De Fontein, respectively. The book is pitched as ‘a quirky, feel-good novel about life and learning to love yourself’. Christian’s debut YA novel Beautiful Mess won the Text Prize in 2016.

Alex Adsett Publishing Services agent Martin Shaw has sold US and Canadian rights to Sydney author Jen Craig’s novella Panthers and the Museum of Fire (Spineless Wonders) to Green Integer imprint Zerogram Press. Originally published in 2015 and longlisted for the Stella Prize, Panthers and the Museum of Fire follows the narrator as she walks across Sydney to return a manuscript by a recently-dead writer. Shaw said: ‘I only came to this book very late, but thereafter it became a particular passion project of mine to take it to overseas territories.’ US publication is planned for late 2020.