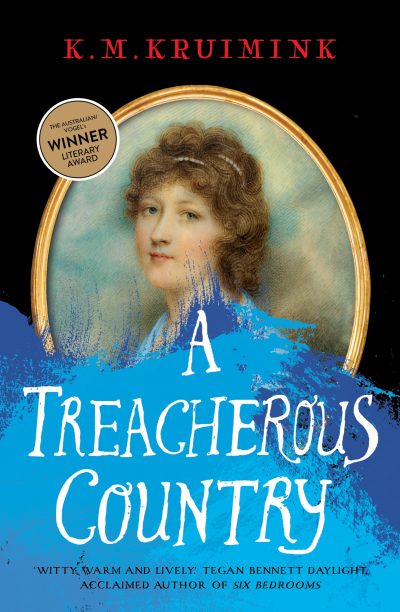 A Treacherous Country by K M Kruimink is the winner of the 2020 The Australian/Vogel’s Literary Award, for an unpublished manuscript by an author under the age of 35.

Publisher Allen & Unwin described the book as an ‘authentic, original and playful novel … about loyalty, wisdom and the freedom to act’.

Judge Tegan Bennett Daylight described the book as ‘witty, warm, livelyand delightful’. ‘It has an assured voice that rose out of the pages rich, complete and true.’ Megan O’Brien, a bookseller at Melbourne’s Brunswick Bound, said of it: ‘Dialogue and interplay are fantastic. The characters and storyline completely “hooked” me. Loved the ending.’

Set in Tasmania in the 1840s, Kruimink’s novel follows Gabriel Fox, newly arrived to Van Diemen’s Land from England and on a quest to find a woman called Maryanne Maginn. Says Allen & Unwin: ‘His guide, a Cannibal who is not all he seems, leads him north. As Gabriel traverses this wild country, he uncovers new truths buried within his own memory.’

Kruimink was born in Tasmania and spent most of her childhood in the Huon Valley where she now resides with her husband and daughter after living and working interstate and overseas for many years. She said that the value of entering The Australian/Vogel’s Award was in helping ‘motivate me to complete something’.

‘It’s astonishingly wonderful to have my book published, and it’s just as wonderful to be able to say, “Yes, this is something I’ve wanted to do”.’

The Australian/Vogel’s prize, which notably launched the career of Australian authors Tim Winton and Kate Grenville among others, was not awarded in 2019 because the judges said they were not able to find a manuscript that lived up to the award’s standards.

Kruimink’s manuscript was shortlisted for the $20,000 award along with three other unpublished manuscripts, also by female writers: Emily Brugman’s The Islands, Belinda Lopez’s Tete and Maree Spratt’s The Followers.