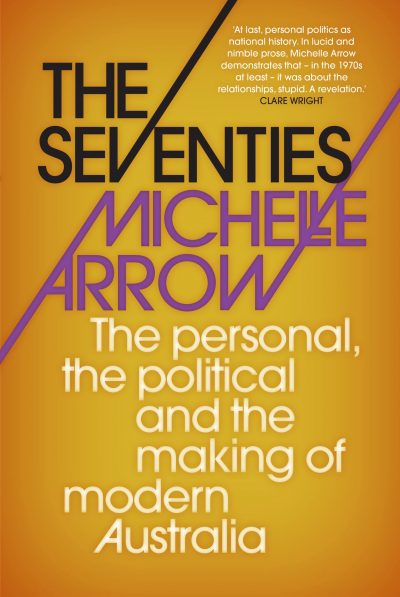 Michelle Arrow has won the 2020 Ernest Scott Prize for history for her book The Seventies: The personal, the political and the making of modern Australia (NewSouth).

The Seventies, which examines the history of Australia through the decade, was chosen from a shortlist of four announced in April. The prize judges said Arrow’s book  is an ‘intensely immediate and relevant history of the 1970s [which] brings to light the astonishing politics of a remarkable decade’.

NewSouth publisher Phillipa McGuinness said, ‘Michelle is such a deserving winner of this prestigious prize. Her book, apart from being the only one I’ve published that has a mustard and purple-coloured cover, shows that the 70s really was a decade of change, especially for women and LGBTQ people. Her archival research is exemplary, but it’s the writing and the way Professor Arrow brings the period to life that makes it so compelling. We’re so glad that its importance has been recognised in this way.’

Arrow said, ‘I’d like to thank Phillipa McGuinness and her wonderful team at NewSouth for all the work they did to help the book take shape. Three of the four books shortlisted for this year’s prize were published by NewSouth: what a wonderful tribute to NewSouth’s commitment to publishing Australian history, and to Phillipa’s visionary contribution to the Australian history landscape.’

The $13,000 prize is awarded annually to a work based on original research that contributes to the history of Australia or New Zealand or to the history of colonisation. The prize is presented by the University of Melbourne’s Faculty of Arts in conjunction with the Australian Historical Association.