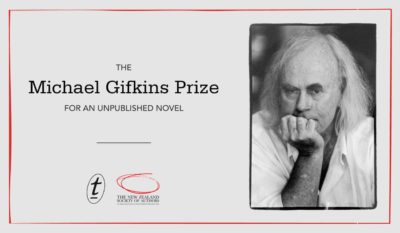 Text Publishing and the New Zealand Society of Authors Te Puni Kaituhi O Aotearoa PEN NZ Inc have announced the shortlist for the 2020 Michael Gifkins Prize for an Unpublished Novel.

The winner, announced in September, will receive a contract with Text for world rights, and an advance of NZ$10,000 (A$9400).

This shortlist was chosen by Text from a longlist of 15 manuscripts curated by New Zealand writers Lee Murray and Paddy Richardson. Murray and Richardson said the quality of the longlisted manuscripts was ‘quite simply, extraordinary’: ‘Our brief was to select on the basis of literary merit and commercial appeal, but when every manuscript, without exception, was potentially publishable, it made the task of selecting a longlist exceptionally difficult.’

Now in its third year, the Gifkins Prize is open to both previously published and new writers who are New Zealand citizens or permanent residents. Intended to run for four years, the prize honours the late Michael Gifkins, a literary agent, writer, critic and publishing consultant. It is funded through a sponsorship from Gifkins’ family and Text Publishing and administered by the NZ Society of Authors Te Puni Kaituhi o Aotearoa.

The inaugural winner was Attraction by Ruby Porter, while last year’s winner, Soldiers by Tom Remiger (shortlisted as ‘The City’) , will be published by Text in September.