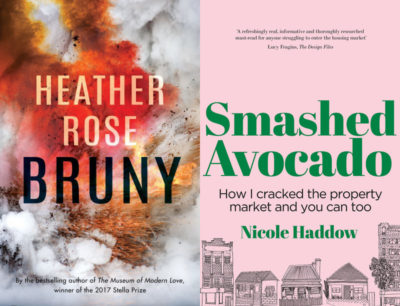 Television rights to Heather Rose’s 2019 novel Bruny (A&U), which recently won the ABIA award for general fiction, have been optioned by Film Art Media, and Good Thing Productions has acquired film and TV rights to Nicole Haddow’s Smashed Avocado: How I Cracked the Property Market and You Can Too (Nero).

Set in a near-future, Bruny follows UN mediator Astrid Coleman as she returns to her home state of Tasmania in the midst of a crisis involving state, federal and international governments and the bombing of a controversial new bridge that links Bruny Island and the Tasmanian coast.

Film Art Media previously produced the award-winning adaptation of Rosalie Ham’s novel The Dressmaker in 2015. The series adaptation of Bruny will be produced by Charlotte Seymour and Sue Maslin.

Rose said, ‘I’m delighted to see Bruny in the hands of such an experienced production team. I love their commitment to bringing this cautionary tale to Australian and international audiences, while also delivering a much-loved Tasmanian story to the screen.’

Adsett said she is ‘thrilled’ the company ‘saw something special in Nicole and Smashed Avocado‘ to develop the book into a series ’empowering more Australians to achieve home ownership and seek innovative ways to reach their goals’.

Nero publisher Sophy Williams said, ‘Smashed Avocado will adapt brilliantly to the screen. Nicole has a perfect blend of authority and down-to-earth Aussie practicality, all with more than a dash of charm.’

Haddow will be involved in the project, which will adapt her book into short- and long-form content, for access across various network or streaming services.

Good Thing Productions producer Charlotte Wheaton said the company is ‘incredibly excited to be working with Nicole on adapting Smashed Avocado into a TV series, a home-grown product that resonates internationally and provides not only a roadmap to home ownership in the new world, but a framework for different generations to discuss it’.