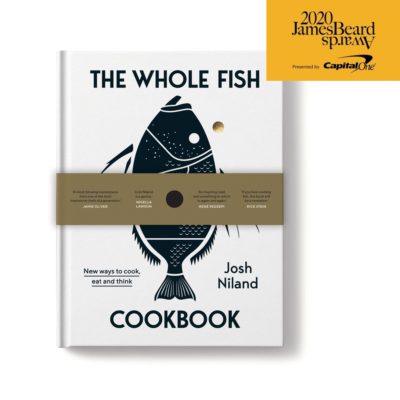 The Whole Fish Cookbook was awarded in the restaurant and professional book category of the US culinary awards, and also took home overall book of the year. It is the first time an Australian has won the James Beard Book of the Year Award.

Niland said, ‘I am overwhelmed. It’s an incredible achievement for all involved. Huge thank you to Hardie Grant and the team for their incredible support and for believing in what we do. Without that belief, a book like this may never have been written. This award will hopefully bring our message to a wider audience.’

According to his publisher, Niland is ‘widely recognised for his transformative work with fish’. He and his wife Julie opened their fish restaurant Saint Peter in Sydney in 2016, the Fish Butchery in 2018 and in March 2020 launched the ‘Mr Niland at Home’ range of dinner kits. The Whole Fish Cookbook previously won the 2019 Food Award at the André Simon Food and Drink Awards in the UK and the 2020 Australian Book Industry Award for illustrated book of the year.

Niland’s win was announced during an online awards ceremony on 27 May, alongside the winners in the broadcast media and journalism categories.

The James Beard Awards recognise culinary achievement by individual chefs and restaurants, as well as in areas such as food reporting and publishing. Winners were also announced in book categories including baking and desserts, photography and international. For a full list of 2020 winners, see the James Beard Foundation website.