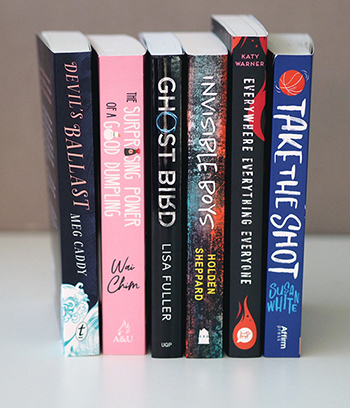 The shortlist for the 2020 Readings Young Adult Book Prize has been announced.

‘Our brief was to find six books that represented great YA fiction, had diversity in style and subject matter, and were stories that young people would enjoy,’ the judges said. ‘We are absolutely thrilled with the final shortlist. Not only do we want you to take note of each of these amazing six authors, but also to know that there is a story here for every YA reader.’

The shortlist was selected by a judging panel comprising Readings staff Angela Crocombe (Readings Kids), Claire Atherfold (Readings State Library Victoria), Bec Kavanagh (Readings Kids) and Joe Murray (Readings Kids). The judges will be joined by YA author Amie Kaufman to decide on this year’s winner, which will be announced in late July.

Now in its fourth year, the Readings YA Prize is open to authors with a debut or second YA novel. Last year’s winner was Stone Girl by Eleni Hale (Penguin). Readings also administers the Readings Children’s Book Prize and Readings Prize for New Australian Fiction, which were both launched in 2014.

For more information about the shortlist for this year’s YA prize, see the Readings blog here.